My Review Of “Ghost Attack On Sutton Street” 2012 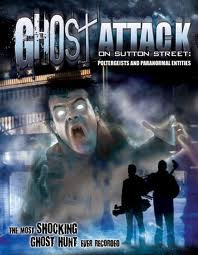 “Ghost Attack On Sutton Street” is a paranormal documentary that follows ghost hunters from Haunted Events UK in search of the supernatural at Old Street Market in Sutton Town England. The Old Street Market is notorious for paranormal activity. The area is so haunted that within minutes the investigation’s medium is contacted by not one, but four spirits, warning them not to split up or risk their lives. Ignoring the advice, they split into two teams. The first team lead by UK Paranormal Expert Lee Roberts, comes face to face with the child murderer named Tap Tap, who taunts them with noises and poltergeist activity. Team two uses thermal imaging cameras to pick up humanoid forms and warm handprints, further witnessing their devices shockingly moved before their eyes, chairs tipping over, tables levitating, glasses thrown and doors slamming. Old Market turns out to be a paranormal goldmine!
The cool thing about this documentary is the cinema verite feel of the film. There is no over editing or production allowing a natural flow that commands your attention. This documentary has an easy believable quality that is lacking from the majority of real time ghost hunting programs today. There is no element of narcissism from the hunters or pretention which opens up the film to an air of honesty. “Ghost Attack” has more moments of contact within the documentary than I have seen in most other shows of this nature. The glass moving trick aside,  ( everyone says they are not moving the glass but there is always someone moving the glass) It is very eerie to see the events play out knowing that you are seeing them as the crew does with no alterations or gimmicks. This is a very entertaining, and more importantly, a very convincing documentary. If ghost hunting is your niche then this is a film for you. I loved it a lot.
You can check it out at Reality_Entertainment.
Posted by A Southern Horror Fan