My Review Of "The Eve" 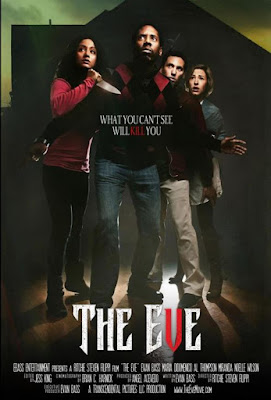 "The Eve" is a classic style psychological thriller directed by Ritchie Steven Filippi. The film stars Al Thompson, Maria DiDomenico, Miranda Noelle Wilson, Evan Bass in a "killer in the house" concept nightmare that takes place on and the eve of New Years. Although it keeps the horror elements toned down, it is all rather PG, "The Eve" does have a pretty tight story arc and moving point-of-view that makes the characters pretty dark and well developed.

The Synopsis: Scott, Jenn, Harry, and Lacey head off to the remote island of Martha’s Vineyard to celebrate New Year’s Eve and reconnect. There are already initial tensions as they have grown apart since the days of college friendships, but as tensions continue to rise, an unforeseen presence halts celebrations and instead turns their holiday into a fight to live through to the new year.

Ritchie Steven Filippi shows some real talent in controlling the story and moving it even paced from start to finish. The cast all give very strong performances and really emote. The dialog moves nicely between character development scenes, and allow for you to really buy into these people and the nightmare situation they are in. Plus for the first 40 minutes or so you really don't get a sense to who is the killer. More on that later.

The special effects are very minimal, as I stated before-everything is really PG here. There are some small moments with blood and a bit of quick violence, but everything stays mostly off camera and suggestive. Filippi nor writer Evan Bass, every get visceral, or gory with the horror so the effects remain mostly driven by the struggles and fears of these characters. Plus the atmosphere has elements of Hitchcock that play up the melodrama and shadowy backgrounds. Most of the film happens at night so the psychological side really does play out well in "The Eve". The film has a nice, classic thriller soundtrack mixed in that carries the atmosphere and emotion of this nightmare.

Overall "The Eve" is a nice thriller for fans of the more 'Lifetime adjacent' stories that works more on emotion and less on horror. The film really does show Filippi and the rest of the cast and crew's talent, I really could find no fault in the performances, the story, the cinematography or even the toned down scenes that call for violence. My only real complaint is that I wanted to see some more blood and carnage, I wanted to really get into the kill scenes on this one. Plus it would have been nice if there was a bit of decor or something that really played on the whole "New Year's Eve" horror aspect of "The Eve". Still it is a decent "soft" thriller with a devious ending, and it does have the Auld Lang Syne song used in a very dark and creepy way!