My Review Of "It's Your Fault" 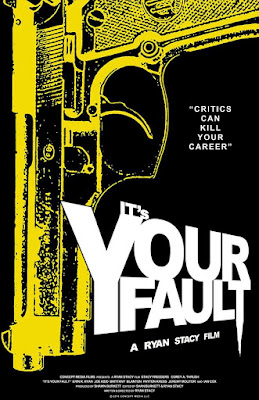 "It's Your Fault" is a thriller and drama wrapped up in a quick and wickedly poignant short film that addresses the ego of some of the most stereotypical of personalities within the film industry. The movie is written and directed by Ryan Stacy, known for "Midsummer Nightmares" and "Ladies Night". It stars Stacy Freeders, Corey A. Thrush, Joe Kidd, Brittany Blanton, Payton Krebs, Titus Wolverton, Ian Cox, Joshua Clemons and Iabou Windimere.

Synopsis:The most disastrous indie film ever, "Shock of the Century," has just premiered. The crowds and critics are coming for blood...it's an indie filmmaker's worst dreams come true! Afterward the cast and crew are to meet up for a post-premiere dinner. However the negative reactions causes the conflicts (both personal & professional) of set-life to resurface. The group is soon enveloped in a cloud of humiliating, maddening memories & exchanges that quickly force a few members to completely snap!

Ryan Stacy's story is dark, humorous and strong. The characters represent some of the most arrogant and vicious stereotypes known in the film industry and Stacy has managed to bring them to life in one wickedly fun short film. "It's Your Fault" also shows some writing growth from Stacy, as the dialog and situational drama written here is some of the strongest and most mature from the young filmmaker who normally plays up the campier, and whimsical side of horror.

The acting is a bit overstated but very appropriately so. The cast really seem committed to the characters and the reward is ours as viewers. Each of the characters are developed, animated, and entertaining. There are occasional moments where the momentum lags a bit but for the most part "It's Your Fault" offers some great dramatic, witty banter between some very vivid players. The horror is minimal, with most of the film building to one wicked, Shakespearian ending.
Posted by A Southern Horror Fan No comments: