A gang of psychotic convicts take a dangerous and ill-advised detour after brutally kidnapping two young girls. As the captors speed away, events quickly turn out to be much more dangerous and gruesome than they had planned for. While driving down a long and dark stretch of deserted highway, the car becomes surrounded by mysterious sinister spirits, forcing the captors and young girls to work together in hopes of surviving the deadly evil force. 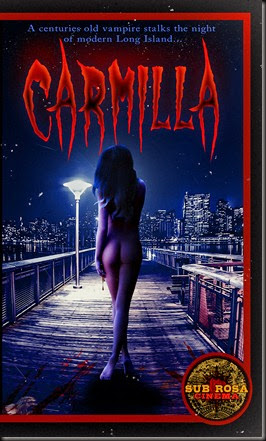 “The legendary tale of Carmilla is brought to life once more in a version more daring than ever told before. Now the infamous She-Vampire is living in modern Long Island, NY and her prey are the darling and delicious teenagers who populate her up-scale town. Inspired by the seminal 1871 tale by Irish author J. Sheridan Le Fanu.”


Sink your teeth into a copy “Carmilla” HERE once LIVE! The VHS releases have been selling out fast, none have last more than a week over last few months and "Twisted Ilusions" sold out within 2 days, so be there EARLY!

The first images have been released for upcoming paranormal thriller “Dwelling”. The film stars Erin Marie Hogan, Devanny Pinn, Mu-Shaka Benson and Abigail Mary . “Dwelling” is directed by Kyle Mecca and promises to be an edge-of-your-seat experience unlike any in recent indie horror.

“Dwelling” is a film about a young woman, Ellie (Erin Marie Hogan), who deliberately buys a haunted house in attempt to make contact with the spirit world. Driven by a horrific experience in her past involving her sister, River (Devanny Pinn), Ellie is willing to put herself and her family at risk to seek the truth. In doing so, Ellie releases a soul that is more malevolent and terrifying than she could ever imagine.