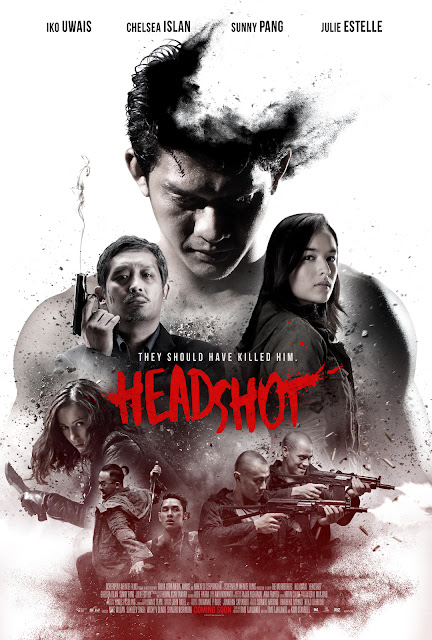 "Headshot" centers on a mysterious young man who, after months in a coma from a gunshot wound to the head, is nursed back to health by a young student-doctor, Ailin. Realizing that the man has lost his memory and identity, the two quickly grow closer, not realizing that behind their momentary peace lays danger. Soon their lives collide with a gang of dangerous criminals led by an enigmatic crime lord – and with every violent confrontation, his memory brings him closer to a dark truth as the lethal personality awakening within him starts to reveal who he really is. 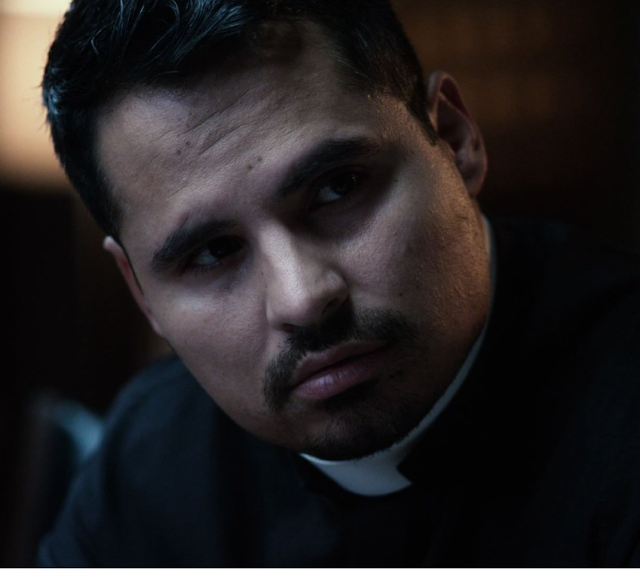 "Extinction" follows a man who has a recurring dream of losing his family. His nightmare turns into a reality when the planet is invaded by a force bent on brutality and destruction. Fighting for their lives, he comes to realize an unknown strength to keep his family safe from harm.
Posted by A Southern Horror Fan No comments:

The first trailer for upcoming horror film "Nails" has been released. The film follows a mother as she faces her mortality and loss of control of her future when a tragedy places her in hospital care. Read the press release below for full details on "Nails" below. 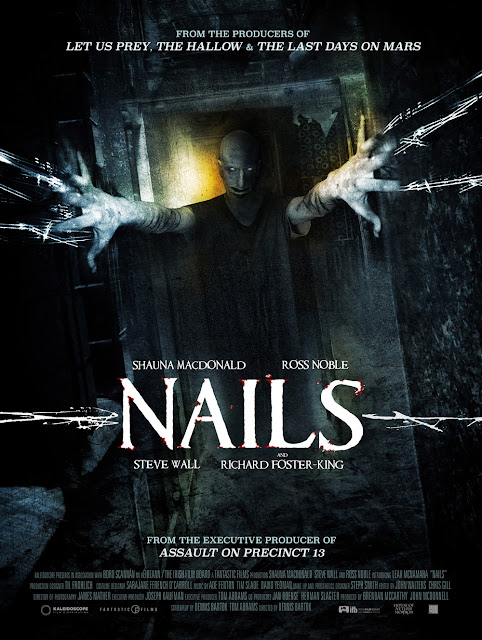 Press Release:
Fantastic Films and Kaleidoscope Film Distribution announced today that the new Irish horror film NAILS will have its World Premiere as part of the Audi Dublin International Film Festival (ADIFF), which runs 16-26 February, 2017.
This intense and claustrophobic thriller centers on a happily married track coach and mother, Dana Milgrom, who’s survived a near-death car accident only to find herself paralyzed and trapped inside her own body. Forced to communicate via an artificial voice program and hooked to a breathing machine, she becomes convinced that a terrifying presence called “Nails” exists inside her hospital room. No one believes her – not even her own husband and doctors, who think she’s experiencing a mental breakdown.
In the vein of recent films like THE BABADOOK and UNDER THE SHADOW, NAILS is part of a new wave of horror that puts female characters and their emotional lives at the center of the story. The film was financed with support from Bord Scannán na hÉireann / the Irish Film Board.
“NAILS is a truly terrifying and suffocating horror film, and we’re thrilled to premiere Dennis’ debut feature here at ADIFF,” says Festival Director Gráinne Humphreys. “Shauna Macdonald gives a fearless, beautiful performance that reminds me of Mathieu Amalric in THE DIVING BELL & THE BUTTERFLY.”
Adds writer/director Dennis Bartok, “Most horror films are about running away – NAILS is the opposite: it’s about being locked inside your own flesh with the terror. I don’t think there’s any other actress who could give the performance Shauna did: her concentration and emotional rawness took the film to a whole different level.”
NAILS is the feature debut from Bartok, who produced and wrote the Lionsgate horror TRAPPED ASHES in 2006, with segments directed by Joe Dante, Ken Russell, and Monte Hellman. Bartok recently published the non-fiction book A Thousand Cuts: the Bizarre Underground World of Collectors & Dealers Who Saved the Movies, hailed as one of the Best Film Books of 2016 by the Huffington Post. He’s well known for his work with the American Cinematheque in L.A. and art-house distributor Cinelicious Pics, which he co-founded in 2014.
UK-based distributor and sales company Kaleidoscope Film Distribution will be releasing NAILS theatrically and on VOD/SVOD in the U.K. and Ireland later in 2017, dates TBA, and will be representing the film for world sales at the upcoming European Film Market at the Berlin Film Festival.
The film stars Scottish actress Shauna Macdonald as Dana Milgrom, which required long hours of make-up to create her graphic injuries and tremendous preparation and focus to portray a character who is paralyzed and forced to communicate via laptop for most of the film. Macdonald is much-loved by genre fans for her role in Nail Marshall’s seminal horror film THE DESCENT (2005) and its sequel THE DESCENT: PART 2 (2009). British stand-up comedian and actor Ross Noble co-stars as Trevor Helms, a nurse’s aide at Hopewell Hospital who slowly comes to believe that Dana’s paranoid visions may be real. Noble first appeared to horror fans in the UK-hit STITCHES (2012), also produced by Fantastic Films, where he portrayed the lead character.

The film was co-written by Tom Abrams and also stars Steve Wall (of Irish band The Stunning), newcomer Leah McNamara in her breakout performance as Dana’s daughter, Gemma, and Richard Foster-King as Nails, with cinematography by James Mather (FRANK) and music by longtime Gary Numan collaborator Ade Fenton.
The producers of the film, Brendan McCarthy and John McDonnell of Fantastic Films, are well known to genre lovers for their recent horror films including LET US PREY, THE HALLOW, THE LAST DAYS ON MARS, STITCHES, THE WAKE WOOD and THE CHERRY TREE. The executive producer of NAILS, Joseph Kaufman, was exec producer of John Carpenter’s 1976 classic ASSAULT ON PRECINCT 13 along with the 2005 remake starring Ethan Hawke.
NAILS will world premiere at ADIFF on Monday, February 20th, at 20:45 PM at Cineworld, Parnell Street, Dublin. Tickets go on sale at 18.30 on 18th January at www.diff.ie, by phone on +353 1 687 7974, or in person at DIFF House & Box Office, 13 Lower Ormond Quay, Dublin 1.
Posted by A Southern Horror Fan No comments: 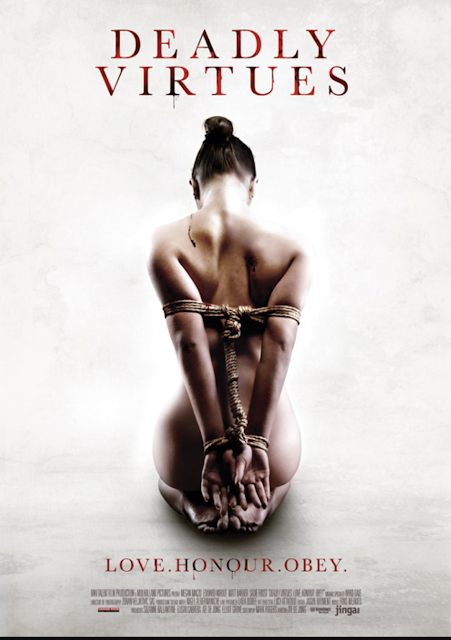 
A stranger breaks into the house of a couple, ties up the husband and, having a whole weekend at his hand, plays a slow game with the woman; a game of threats, fear, obedience - and intimacy.

Also, check out the NSFW Trailer for the film below, and read my review of the film here: My Review Of "Deadly Virtues" 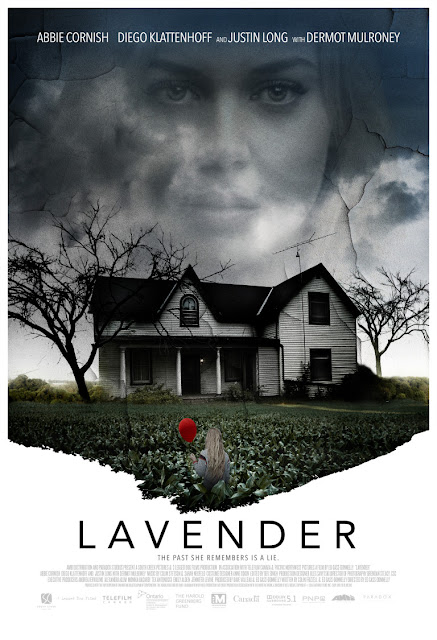 Press Release:
Samuel Goldwyn Films and AMBI Group will partner on the domestic release for the anticipated thriller, “Lavender.” Directed by Ed Gass-Donnelly (“The Last Exorcism Part II”) who co-wrote the film with Colin Frizzell (“Resident Evil: Apocalypse”), the film stars Abbie Cornish (“Limitless”), Diego Klattenhoff (TV’s “The Blacklist”), Justin Long (“Live Free or Die Hard”) and Dermot Mulroney (“My Best Friend’s Wedding”).
Samuel Goldwyn and AMBI will release the film exclusively on DISH on Feb. 3, 2017 one month before it hits theaters and VOD on March 3, 2017. “Lavender” is the second collaboration between the two companies, which will release the Simon Aboud film, “This Beautiful Fantastic,” on March 10, 2017. 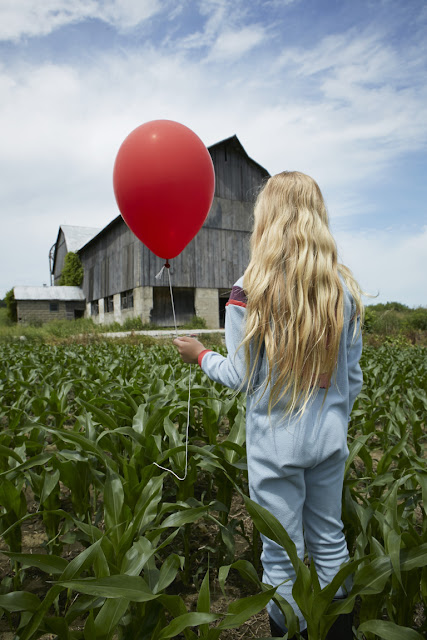 “Abbie Cornish provides a stellar performance in this psychological thriller,” said Melanie Miller, Executive Vice President of Samuel Goldwyn Films. “With beautiful cinematography and a distinct vision from director Ed Gass-Donnelly, we are proud to distribute “Lavender” in partnership with Ambi Group.”
In “Lavender,” when a photographer (Abbie Cornish) suffers severe memory loss after a traumatic accident, strange clues amongst her photos suggest she may be responsible for the deaths of family members she never knew she had. Justin Long plays a psychiatrist who helps her recover lost memories.
Produced by Dave Valleau (“Capote”) and Ed Gass-Donnelly, “Lavender” was executive produced by Andrea Iervolino (“The Merchant of Venice”), Monika Bacardi (“The Humbling”), Tex Antonucci (“The Entitled”), Emily Alden (“Mountain Men”) and Jennifer Levine (“G.B.F.”).

A crowd funding campaign has began for Studio 605's slasher flick "Scream For Summer". The film comes from an original concept by Writer-Director Cheyenne Gordon. Now with a few tweaks that screenplay will see the light of day. 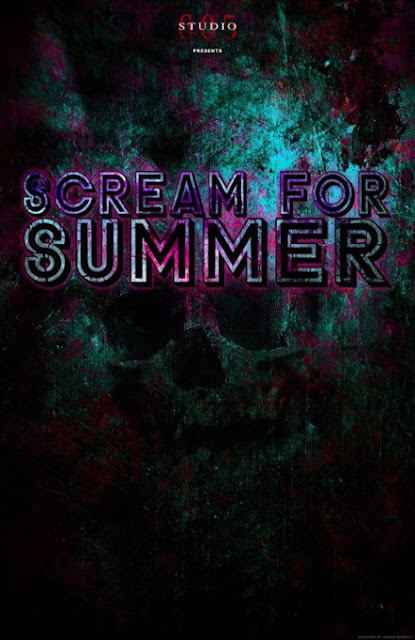 From the Indiegogo page :

Years ago Writer/Director Cheyenne Gordon came up with an idea that would become a love letter to the 90's genre of slasher horror known as "who done it". That love letter would become a film called Slasher Flick and would end up never seeing the light of day and put on the back burner... until now! Now teaming up with Studio 605, Jonestown Films, and Concept Media Cheyenne is ready to bring his film to light with a few tweaks for story and tone and deliver the best love letter to 90's horror yet still giving you a very original story and feel in Scream for Summer!