My Review Of "Deadly Virtues" 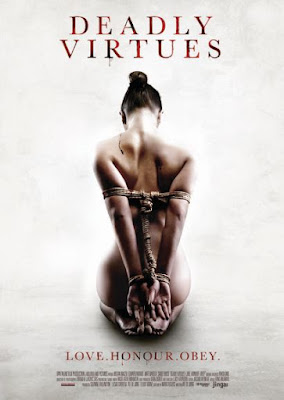 Synopsis: A sadistic home invader exploits the relationship of a suburban, middle class couple. Aaron, is a psychopath and expert in Kinbaku, a Japanese fetish art of tying knots. His torture of the husband and seduction of the wife reveals an uncomfortable truth about their marriage and acts as a catalyst for liberation.

"Deadly Virtues" doesn't completely nail it, there are moments that play out almost like cliche of the erotic horror subgenre. At times the energy falters, and certain moments that could have really pushed the horror over the edge are only mediocre. That being said, the characters are developed more than you usually see in these sorts of stories, the subtext is deep and dark, and the acting is captivating enough to cause you to built a very intense connection with the characters. Plus the ending is one that I didn't quite see coming, made me angry until the ending finally played out- an ending that is well worth setting through the sexual overture that runs through "Deadly Virtues", and that sense of discomfort in seeing some of the scenes play out.

Overall, "Deadly Virtues" is worth watching on so many levels. I enjoyed being pushed into less comfortable forays of "what is horror" and "what is erotic". Rogers story balances it nicely and De Jong brings it to scream wonderfully. The special effects are practical, even though they are limited and not a big focal point of the movie. The real focal point of "Deadly Virtues" comes from actually watching the film, experiencing this situation through the eyes of these tragic characters, and that ending. This is one of the better, more elevated torture-porn, exploitation, and modern cult films I have seen in a while.