My Review Of "Para Elisa" 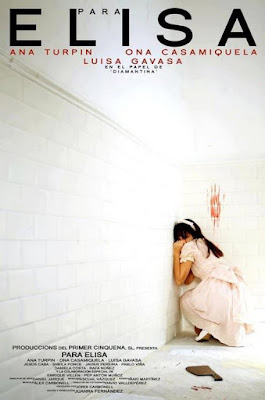 Synopsis:  When college student Ana (Ona Casamiquela) agrees to work as a caretaker for the mentally challenged Elisa (Ana Turpin), she initially sees it as just a way to pay for a post-graduation trip. Ana sets about her job, as she doesn't believe Elisa is too overly difficult to care for, only to soon realize that Elisa's overbearing mother Diamantina (Luisa Gavasa) is more than just an eccentric and wealthy matron. Diamantina is also mentally unstable and kidnaps Ana with the intention of keeping her in the house forever.

"Para Elisa" is a pretty stereotypical nightmare scenario that is very familiar to most horror fans. It is kind of a "fly in the spider web" situation. The lead character, Ana, is a typical college kid looking for a job. Unfortunately this leads her into the clutches of a house of horrors. The characters are developed nicely, the killers more so than the poor Ana. They are cliches of archetypes found in numerous horror films, and thrillers, but Fernandez does an amazing job at keeping the story interesting enough to pull you into the film, and connect with the characters. The cinematography is a key factor in this ability to give "Para Elisa" the right amount of macabre to keep you on edge.

The special effects are not all that inventive, or gut-wrenching. The suggestive nature of the act that puts these effects into play, however, are very gut-wrenching. The true visceral nightmare that makes "Para Elisa" work is the way that Fernandez makes us relate to the traumatic situation that Ana is in, and the horrors she endures at the hands of a truly deranged Elisa-the real Antagonist of the movie. The torture/kill scenes never really get gory, or visceral enough for me personally. Not that they are any less effective in telling the story, I just would have really fell in love with "Para Elisa" had the actual horror elements been captured on camera, and forced me to endure the visual carnage and brutality. I just wish that Juanra Fernandez would have embraced a bit more splatter-gore with this one.

Overall "Para Elisa" is a nice, well produced horror film. It is a worthy film for any horror fan to enjoy- and in my personal opinion, this one is one of the better import horrors that I have seen in a while. A word of caution-the scenes that don't deal with Ana and Elisa do drag the energy of "Para Elisa" down some, not much but it is noticeable. And even though the characters are just the right amount of tortured and the right amount of psychotic, they are redundant in the horrorsphere so not all who watch the movie will be pleased. I for one liked it enough to recommend it.
Posted by A Southern Horror Fan