My Review Of "Doomsday" 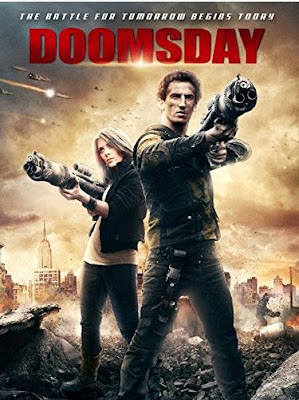 "Doomsday" is a low budget, British sci-fi about the beginning of the end of the world as we know it. The film is directed by Neil Johnson and explores time travel theories such as causality and temporal displacement. "Doomsday" stars  Alain Terzoli, Amy Pemberton, Darren Jacobs, Richard O'Bryan, Helen Soraya and Jade Alexander.

Synopsis: Achilles, a normal man infected with a disease that will bring down the Erebus rulers (human/machine hybrids) escapes back in time from 2410 to the present day where he has a chance to stop the Erebus from ever rising to power. However he is followed by the Erebus-7 who will stop at nothing to hunt him down.

Johnson's story has a familiar trope that builds on a world where humanity is nearing a total genocide at the hands of a superior race. A race that in actuality is an evolution kickstarted by the events triggered by a time travel whose intentions are to make sure the resistance is allowed to be kickstarted. All part of that time travel continuum thingy that can give lay persons such as myself a headache thinking about it.

"Doomsday" doesn't quite reach the level of awesomeness that other British sci-fi films reach. The characters and plot fall on the lower side of writing-as far as substance and character building. The dialog at times doesn't quite feel natural to the events taking place, the moments often do not seem as how a human in this profound situation would really act. The events and subject matter are slightly "been there, done that" in sci-fi/time travel films. However the last third of the film does seem to capture heart, emotion, and real substance with tying all the people and events together.

The special effects used in "Doomsday" fall in between 'Dr. Who' and 'Metal Hurlant' . They are on the cheaper side but the blend into the natural background of the film actually works to the advantage of Neil Johnson's movie, the CGI contrast gives the scenes and actions some character and entertainment value. Maybe not for all sci-fi, or more importantly British sci-fi fans, but I liked it. The special effects are stripped down more and the action is on a milder scale than some of the bigger budgeted films, but the setting, and design of it all is pretty cool and creative. Overall "Doomsday" is a pretty decent sci-fi story, true it gets caught up in the quagmires of familiarity and played out theories, but what hasn't in cinema these days. Check it out but just know that "Doomsday" is not some overstuffed, popcorn action thriller flick.
Posted by A Southern Horror Fan