Fan Film "The Confession Of Fred Krueger" Has Been Released Online 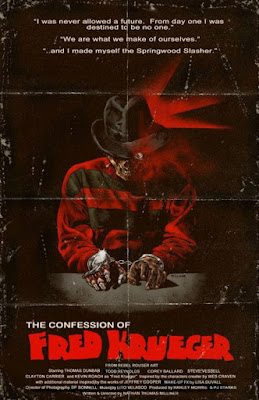 Nathan Thomas has released his fan film "The Confession Of Fred Krueger", a fan fiction origin film that he has dedicated to both his passion and love for "A Nightmare On Elm Street" and in honor of the passing of one of horror's Fathers' Wes Craven. You can check out the 30 minute short film below, over on Youtube- whichever.

Also influenced by the short story “The Life and Death of Freddy Krueger” as written by Jeffrey Cooper.
Thomas-"In 1988 I became a major fan of Freddy and the Elm Street films. I was 12 years old and the series and story of Wes Craven’s boogeyman captured my imagination and inspired me. After reading “The Nightmare on Elm Street Companion” by Jeffrey Cooper, I had this image of the origin story of the character Craven had invented. For over 25 years I held out to see Hollywood bring the story of the Springwood Slasher to the big screen. But it never happened. While talking to some other fans one day I was told that I should write a script.
When I thought about a possible script I imagined what I most wanted to see Robert Englund do. I wanted to see him tell the story of Freddy. I wanted to see Englund show off his chops, sans make-up and to be able to play Freddy as more than the man in the shadows or the one liner king of monsters. But a real, gritty, dark,  horrifying discussion of who he was, where he came from and what he had done with his life just before his lynching. The interrogation seemed to be the best way to do this. So I sat down and wrote a 10-page short film about the confession of Fred Krueger. I decided to stick to the original film as much as I could as the series altered the origin story Craven and Cooper had introduced to me. My story would take place in the early 1970s upon his arrest. I would pull from interviews and articles with Craven, Englund and others. Also employed plot lines and details left on the cutting room floor from deleted scenes. I would fill in gaps as needed and make changes and create characters and plots to make the story I was wanting to tell.
I attempted to first make the film as early as 2013, then again in 2014 until finally moving forward in the Summer of 2015 after finding the perfect team to bring this script to life. With my talented cinematographer and editor DP Bonnell by my side, we moved to get this made. I was mostly inspired by Kevin Roach, my actor who would play Freddy. After working with Kevin on my previous film “The Encyclopedia Satanica”, I knew he was born to take on the role. So I saved up about $1,000 and we went into production in June. It was a 4 day shoot all over Western Kentucky and Indiana. So many talented people leant their time and talents to the project and some with ties to the series. Even Charles Bernstein gave our composer Lito Velasco his blessing to score the film, giving Bernstein’s legendary score a new twist while staying true to the atmosphere Charles had brought to Craven’s film. The band The Tiger Lillies also liked the idea of the project and let me use one of their songs as the ending credits. It was a project blessed with favors from some extremely talented and gifted people who I cannot thank enough.
So here it is, my eternal love letter to the great Wes Craven who I am still devastated by his recent passing. I made it for him and sadly, he will never get to see it. But he lives within every frame of it. I miss you, you inspired me and for your imagination and art I will always owe you dearly. "