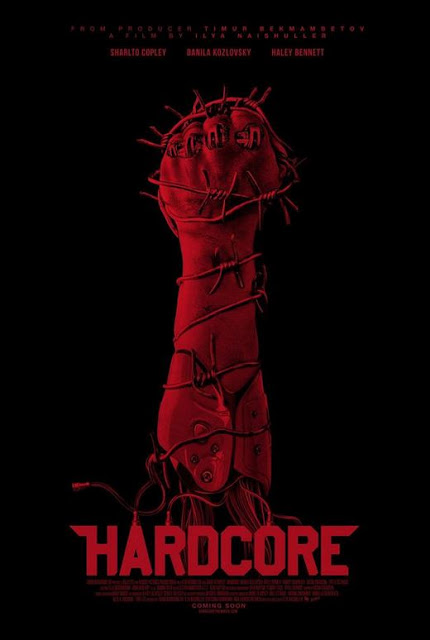 The official poster and trailer for Ilya Naishuller’s first person point of view film "Hardcore". The movie stars Sharlto Copley, Danila Kozlovsky, Haley Bennet, and Andrei Dementiev. "Hardcore" isn't the first of its kind to come out but it by far looks better than earlier indie attempts to bring some "gamer" styled perspective into the horror movie realm.


You remember nothing. Mainly because you’ve just been brought back from the dead by your wife. She tells you that your name is Henry and congratulations, you’re now a cyborg.
5 minutes later, your wife has been kidnapped and you should probably go get her back. Who’s got her? His name’s Akan (Danila Kozlovsky), he’s just a psychotic megalomaniac with telekinetic powers, and a never-ending army of mercenaries. You’re also in an unfamiliar city of Moscow, Russia and everyone wants you dead. Everyone, except for a mysterious, British fellow called Jimmy (Sharlto Copley). He might be on your side. Good luck Henry. You’re very much likely to need it.
Oh, did I tell you that your battery is quickly running out?
Posted by A Southern Horror Fan