My Review Of "Jake's Road" 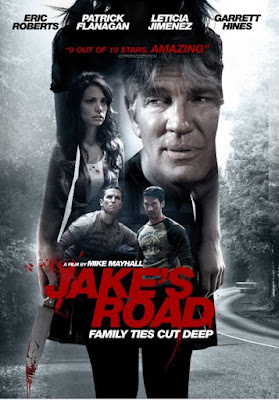 "Jake's Road" is directed by Mike Mayhall and stars Eric Roberts, Garrett Hines, Leticia Jimenez, Tim Bell, Patrick Flanagan. The story revolves around a family, a group of friends, and the last hurrah at a weekend getaway property. It is a action horror that focuses on heavy suspense, and survival horror themes.

A young man awakens in a hospital, bruised and beaten. He struggles to piece together the events flooding through his mind. As flashes of clarity slowly emerge, so does the horrific image of a killer; who is creeping ever closer. Somewhere within the madness is the key to the killer’s identity, but once discovered the truth may be more horrific than the murders themselves.

Mike Mayhall presents us with a slightly elevated story that relies on a mature cast of "30-something plus" characters who really do give quality performances. The writing isn't the most developed material when it comes to actual dialog, but the overall story is a nice slice of heavy, dramatic, thrilling character study that mixes with a solid level of survival horror. I found "Jake's Road" to be very intense, and entertaining. A few moments in the film I jumped because of the intensity of the moment and the connection I had toward the characters.

The special effects are pretty tight through most of the film. There is some CGI shots that kind of lessen the effect of the scenes but no more than what we have to deal with in some of the horror television series and most horror films with a decent budget. You just kind of have to take CGI with a grain of salt now days. The good thing is that Mayhall and his team did choose to stick with mostly practical effects and blood for the majority of the film. The only real downer during the horror scenes was the refusal to get visceral and gory when it could have really amp'd up "Jake's Road" so much more. But still the overall choices made in this department work well.

Overall "Jake's Road" is a nice viewing experience with some really tense, thrilling moments that seem to start almost from the beginning. The film does have some very familiar themes and set-ups that aren't too original or creative, but the story and acting is good enough to really sell this nightmare situation to movie-goers. The energy does falter a bit at the big climax. Not because of the acting or anything, but the dialog seems to be a bit haphazard. Anyway the momentum slows down somewhat in the final scenes of the film, and once the truth of "who's behind the killings" is revealed, it does feel sort of cliche. Still "Jake's Road" is definitely worth checking out, and well over 90% of the movie is solid.
Posted by A Southern Horror Fan