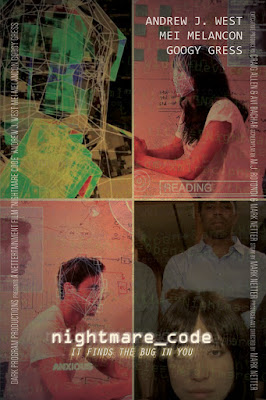 Synopsis: Brett Desmond, a genius programmer with a troubled past is called in to finish a top secret behavior recognition program, ROPER, after the previous Lead Programmer went insane. But the deeper Brett delves into the code, the more his own behavior begins changing…in increasingly terrifying ways. Suspense builds with surveillance, PC, and eyeglass cameras – often with four images onscreen at once…as if ROPER itself is telling the story.

The story that Mark Netter brings to life in this virtual point of view nightmare is clever, elevated, and thrilling. Honestly the tech theories and philosophical theoretical surrounding this degree of artificial intelligence is so over my head that natural a story such as "Nightmare Code" is going to both fascinate and terrify me. I can't honestly praise or debunk the actual material used in the film concerning the code writing, or programmers because that is tech geek stuff, and I still call anime "cartoons". See what I am saying. But I can say that the creative, and brilliant way that Netter tells this story, one does not have to be a tech geek to really get into the movie. It pulls you in, you wanna watch, you feel the horror coming, and you wanna see it happen.

"Nightmare Code" isn't all sterile, emotionless A.I gimmick stuff either, the characters are as developed, and personable as any third person psycho-thriller, or traditional tech horror-"Brainscan" and "Lawnmower" man come to mind.  Anyway, everything about this film is captivating, intense, and thrilling. Things you don't always get from found footage concepts- all though it isn't really fair to just call this found footage. It is something more. And it all really does come from the POV of A.I , all that data and application stuff that lives inside our devices staring back at us, and in this case-learning and adapting and coming to get us!

The special effects in "Nightmare Code" may be the first time I was thrilled, chilled, and entertained by CGI effects. The scenes are blunt, visceral, and affecting. You feel like you watched these deaths really happen, and the blood splatter was awesome. Not a lot of gore, but then I don't think-well I hope-that A.I will never get that into the gory side of killing and death to wanna really revel in it! Fingers crossed and the gods appeased! Overall "Nightmare Code" is a definite watch horror film for all, even the ones who normally flee from found footage concepts should check "Nightmare Code" out. The ending does fall a bit short with the thrilling, horror nature that from the beginning of the film is a steady, haunting build up to the nightmarish climax. It ins't really that much but it is the one noticeable flaw in an excellent flick. And that last sequence before credits is kind of cliche and hokey but unless you end the film a scene earlier it is really the only closing that ties up the plot.
Posted by A Southern Horror Fan