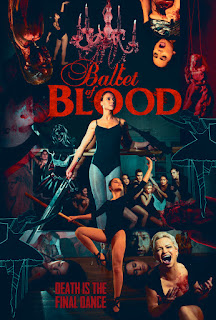 Ballet of Blood, the 9th feature film by Jared Masters, won Audience Choice Award (for day 3) at the 2015 RIP International Horror Film Festival. It was also nominated for Best Acting Ensemble and Best Editing. The world premiere was held at the Echo Park Film Center on October 28th, 2015. Jared Masters and his date, Taylor Victoria (8 Reels of Sewage), arrived in costume, as Sid and Nancy.

The Ballet of Blood DVD and VHS has a release date of December 5th, just in time for the holiday season. Expect VOD this March.

After years of emotional abuse and body shaming, two ballerina's drug-fueled fantasy, of viciously attacking their ballet school, becomes reality. Meanwhile, a nerdy ballerina starts writing a novel based on the events that transpired, deeply offending some for turning such sensitive material into a book, for young audiences. Soon, her and her sister realize that every word being typed is somehow altering real life at large. Will this strange and psychedelic paralleling fantasy carry the sisters, along with anyone else, to a merciless blood-splattered doom? 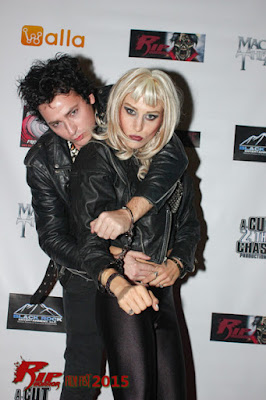 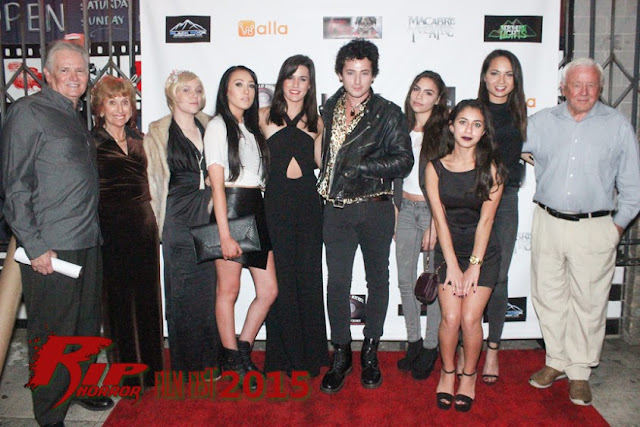 Check out the green band trailer!

https://www.youtube.com/watch?v=Y7K6srIQUL8
Posted by A Southern Horror Fan No comments: Links to this post

Mixer and reception before screening.

Sleepaway Camp. Written and directed by Robert Hiltzik. Produced by Jerry Silva and Michele Tatosian. From United Film Distribution Company. Color, 1983, USA, 84 minutes, rated R. Horror. Starring Mike Kellin, Felissa Rose, Jonathan Tierston, Karen Fields, Christopher Collet and Katherine Kamhi. After a horrible boating accident kills her family, Angela, a shy and sullen young girl, moves in with her eccentric aunt Martha, alongside her protective cousin Ricky. One summer, Martha sends the kids to Camp Arawak. Soon after their arrival, a series of bizarre and increasingly violent accidents begins to claim the lives of various campers. Who is the twisted individual behind these murders?

"This film just screams 80s goodness! In my humble opinion, Angela from the Sleep Away Camp series is one of the best and most shocking slashers ever made. We all have our own camp memories. What better way to spend a campfire night at than at Sleep Away Camp." James Cullen Bressack

"There are great films and then there are magical films, glorious oddities that pop up sui generis out of nowhere. Sleepaway Camp falls squarely into the latter category." Scott Tobias

At Arena Cinema Hollywood, 1625 N. Las Palmas Blvd., Los Angeles, CA 90028. Discounted parking is available with validation at lots adjacent to the venue and across the street.
Posted by A Southern Horror Fan No comments: Links to this post 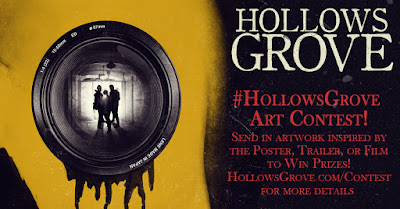 There is an art contest taking place for "Hollows Grove". The prizes include cash, a movie poster signed by Lance Henriksen as well as the rest of the cast and also other memorabilia. For more information, check out our link at: http://www.hollowsgrove.com/contest/

A young filmmaker, Harold Maxwell, is filming a behind-the-scenes documentary about his friends – the Spirit and Paranormal Investigation Team (S.P.I.T) and their ghost hunting reality show. Harold joins the S.P.I.T crew as they head out to their next assignment, to film an old, abandoned and supposedly haunted orphanage, Hollows Grove. Soon after arriving at the orphanage the team begins to realize that what they thought would be a routine investigation is turning into a nightmare from which they can’t escape. 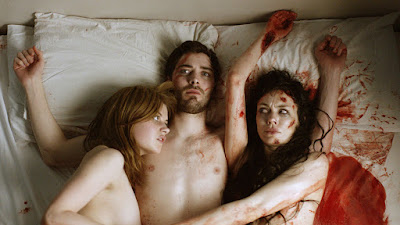 Press Release:
Epic Pictures Group will release the critically acclaimed horror/romance film NINA FOREVER on February 12, 2016, Valentine’s Day weekend. The announcement was made today by Epic Pictures Group CEO Patrick Ewald and Co-Founder Shaked Berenson. Epic Pictures acquired the film following its world premiere at the 2015 SXSW Film Festival, where it received widespread critical acclaim and generated strong word-of-mouth buzz from audiences. StudioCanal UK will also release the film in the United Kingdom. Epic Pictures is currently selling additional international territories at the American Film Market (AFM).
Written and directed by Ben and Chris Blaine, NINA FOREVER was honored with multiple British Independent Film Awards nominations this week, including Best Debut Director for the Blaine Brothers and Most Promising Newcomer for lead actress Abigail Hardingham. The film was previously recognized with the Best Feature award at FrightFest 2015.
A darkly comedic romantic horror story exploring love and grief, NINA FOREVER follows Holly (Abigail Hardingham) as she begins a relationship with her co-worker Rob (Cian Barry), who is grieving over the recent death of his girlfriend Nina (Fiona O’Shaughnessy) from a motorcycle accident. Holly has fallen for Rob and is determined to help him though his grief. Yet, every time they make love, Nina appears… tangled, bloody, and still fixated on Rob. Holly doesn’t freak out and run – she can deal with the dead girl sharing their bed, their lives, their minds. If it’s what Rob needs, it’s what she’ll do, regardless of the consequences.
“NINA FOREVER offers a strong alternative to audiences sick of the standard, overly sappy Valentine’s Day fare,” commented Epic Pictures CEO Patrick Ewald. “The film smartly mixes humor, horror, and romance elements in a film that is surprisingly touching and thought-provoking.
Epic Pictures Co-Founder Shaked Berneson added, “Similar to It Follows, Nina Forever appeals to wider audiences because of its subtext. Unlike pure horror films, it’s a relationship-horror story in which well-drawn characters drive the story.”
Posted by A Southern Horror Fan No comments: Links to this post 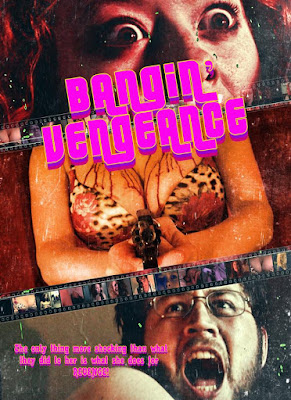 SRS Cinema, a leading distributor of underground cinema, has recently launched a brand new Vimeo channel offering up advance releases on their newest acquisitions, as well as adding out of print titles from their vast library. First up, they’ve added “Bangin’ Vengeance” and “Teenage Slumber Party Nightmare” to their channel, both of which don’t hit worldwide DVD or VOD until Dec 15th, 2015. The movies launched with both a download to own ($9.99) and 24hr rental ($3.99) option. SRS plans to add 1-2 titles every one to two weeks.

SRS currently offers up small run limited editions, often with bonus items you won’t find in the regular releases, on formats like Blu-Ray and VHS months in advance of the international run of their movies. “These underground movies have a tough time competing for attention in an already over-saturated market” explains SRS president Ron Bonk. “But thanks to social media, we are able to interact directly with the fans, and we have a sizable base from being in business since 1992. We started off offering these movies on VHS first, about 4-6 months before they hit international DVD and VOD, and found great success with that. We then added limited edition Blu-Rays and even occasionally DVD’s, also about 4-6 months in advance, and those too received enthusiastic responses from the fans. The next logical step seemed to be VOD, which will be about a month before the main release.  And of course, we will be pulling out older titles from our library, many of which are no longer available on DVD, and adding them to the channel.“

To keep up on SRS Cinema’s latest VOD offerings, or any of their releases, swing on by their page at www.srscinema.com. You can also find them on Facebook @ www.facebook.com/srscinemallc/ and on Twitter @ www.twitter.com/SRSCinema .
Posted by A Southern Horror Fan No comments: Links to this post

DVD Release Details For "The Visit"

A single mother finds that things in her family's life go very wrong after her two young children visit their grandparents. 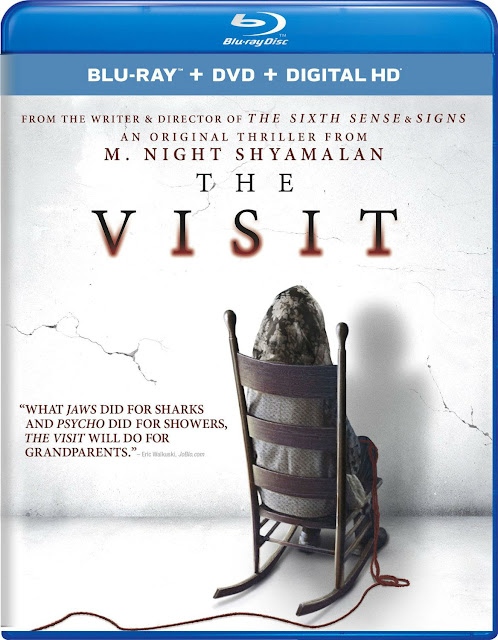 Check out the new poster artwork for "Dracula A.D. 1972" and "The Mummy". The pieces were created for the crowd funding campaign for upcoming Hammer Horror documentary. This limited edition, numbered, 18X24” museum-quality art print by artist Steve McGinnis was created exclusively for the Kickstarter campaign and is available via two new reward levels.
The Blu-Ray and Kickstarter Campaign

The classic Hammer films from Warner Bros are now finally starting to appear on Blu-ray. However, they have never received an in-depth exploration in any special feature or documentary. Now, the fascinating story can finally be told in this unprecedented 90-minute documentary, HAMMER HORROR: THE WARNER BROS YEARS, written and directed by Marcus Hearn, Hammer Films’ official historian. The documentary will feature exclusive interviews with many of the key players from that period, as well as authors and film historians like Jonathan Rigby and Constantine Nasr. Also included will be rare production stills, film footage, Hammer’s original shooting locations, and access to previously unseen archive documents. The documentary will be available via streaming and in a limited blu-ray release, exclusive to our Kickstarter campaign.
Extra Features
In addition to the main feature, the blu-ray will also contain extended interviews with some of the key participants. Other extras will be announced as they become confirmed.

Hammer fans, we need your support to make this happen. Contribute HERE! 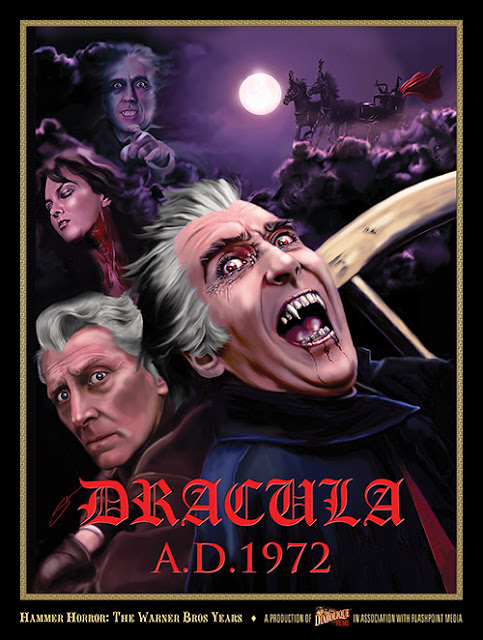 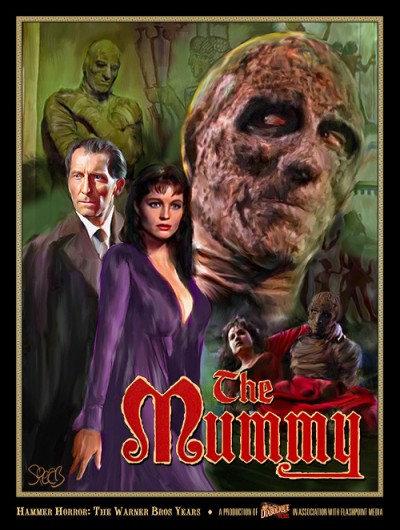