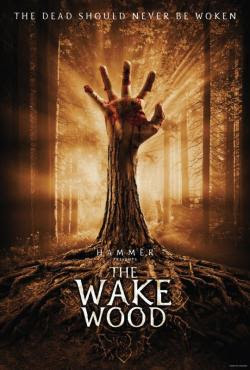 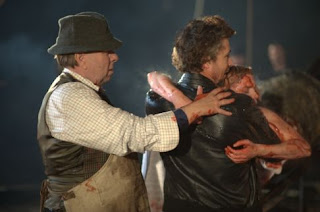 Still grieving the death of nine-year-old Alice – their only child – at the jaws of a crazed dog, vet Patrick and pharmacist Louise relocate to the remote town of Wake Wood where they learn of a pagan ritual that will allow them three more days with Alice. The couple find the idea disturbing and exciting in equal measure, but once they agree terms with Arthur, the village’s leader, a far bigger question looms – what will they do when it’s time for Alice to go back?

Audiences everywhere are in for a Smurfy good time as the Smurfs make their first 3D trip to the big screen. When the evil wizard Gargamel chases the tiny blue Smurfs out of their village, they tumble from their magical world and into ours – in fact, smack dab in the middle of Central Park. Just three apples high and stuck in the Big Apple, the Smurfs must find a way to get back to their village before Gargamel tracks them down. The film is set for release August 3, 2011. 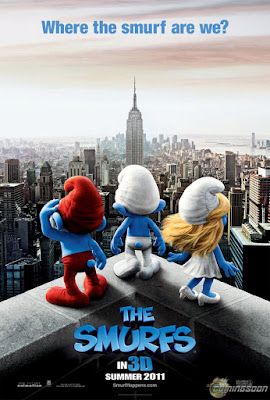 "What is Scary?" Documentary/ Social Experiment


Taking the audience on a visual and aural journey, its presentation will be through a combination of Ken Burns-styled still images consisting of licensed stock photos; original photographs by the filmmaker and hired photographers, as well as animations.  The callers' responses and imagery will be underscored with a feature-length track of ambient sound design. 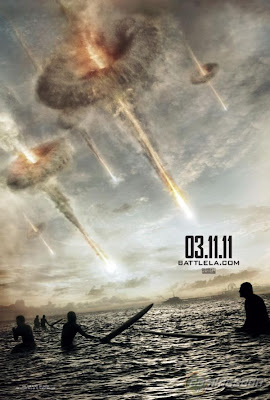 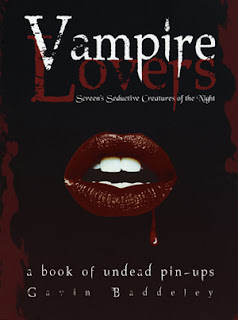 A new generation was awakened to the romantic lure of the vampire genre with Robert Pattinson's portrayal of Twilight’s soulful vampire, Edward Cullen. This book is for all those whose thirst remains unsated. A heady history of the silver screen’s undead dreamboats, this intoxicating study examines each of the mesmerizing performers who have taken on the role of leading vampire. From Buffy’s brooding flames David Boreanaz and James Marsters to Stephen Moyer, the pulse-quickening star of True Blood, every intriguing incarnation of Stoker’s monster is found here. Beginning with radical characters like Kate Beckinsale’s gun-wielding, PVC-clad action hero in Underworld and ending with delectably dark visions of legends Christopher Lee and Bela Lugosi, the book demonstrates precisely why the fascination with this genre — much like Cullen’s timeless love — will never die. Illustrated with more than 100 irresistible film stills, Vampire Lovers is essential reading for any well-informed fan.
amazon.com site
Posted by A Southern Horror Fan No comments:

2 New Clips For "Season Of The Witch" 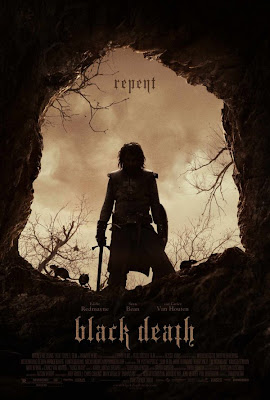 Synopsis:
Medieval England has fallen under the shadow of The Black Death. In this apocalyptic world filled with fear and superstition, a young monk called Osmund is charged with leading the fearsome knight Ulric (Sean Bean) and his group of mercenaries to a remote marsh. Their quest is to hunt down a necromancer - someone able to bring the dead back to life. Torn between his love of God and the love of a young woman, Osmund discovers the necromancer, a mysterious beauty called Langiva. After Langiva reveals her Satanic identity and offers Osmund his heart's desire, the horror of his real journey begins...

Black Death - Trailer
Uploaded by dreadcentral. - Check out other Film & TV videos.
Posted by A Southern Horror Fan No comments:

The Return of Clive Barker's Hellraiser! 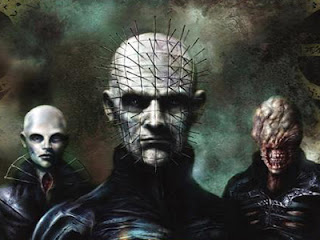 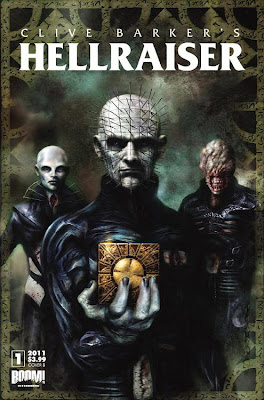 he debut volume of the HELLRAISER: MASTERWORKS series sees a slew of spine-tingling Pinhead tales by such creators as Clive Barker, Neil Gaiman, Mike Mignola, Alex Ross & more, with cover by John Bolton!
“Beyond being a legendary creator of all things macabre, Clive Barker is truly an amazing individual and I’m proud to be able to work with him on reviving one of his most celebrated creations with HELLRAISER,” said Editor-in-Chief Matt Gagnon. “I’ve known Clive for years, but this is the first chance we’ve had to work together and I couldn’t be more excited. It’s been unbelievably gratifying to develop this series and witness the visceral, relentless, and shocking story that Clive has in store for a new generation of horror fans. Readers beware! Hell comes home this March!”
Clive Barker has “touched” HELLRAISER only twice before: once to write THE HELLBOUND HEART, and once more to write and direct the original HELLRAISER film. With the HELLRAISER ongoing series, witness Barker’s long-awaited return to tell a new chapter in the series’ official continuity—a trajectory that will forever change the Cenobites…and Pinhead! So prepare your soul for an epic journey into horror from one of the medium’s greatest voices, and starring one of the medium’s greatest characters, in an unforgettable new chapter of HELLRAISER.
Joining the HELLRAISER ongoing series in March is the debut of HELLRAISER: MASTERWORKS VOL. 1, a collection of classic HELLRAISER tales that will light your soul on fire! This must-have collection, originally published by Marvel Comics, features classic spinetinglers for die-hard fans and new readers alike, and collects a host of work from comic luminaries that you will not want to miss! Featuring the work of Clive Barker (HELLRAISER), Neil Gaiman (SANDMAN), Mike Mignola (HELLBOY), Larry Wachowski (THE MATRIX), Alex Ross (KINGDOM COME), Kevin O’Neill (LEAGUE OF EXTRAORDINARY GENTLEMEN) and many more — including a cover by John Bolton! You will not want to miss this first volume in a series that will assemble the best HELLRAISER comics that have ever been! 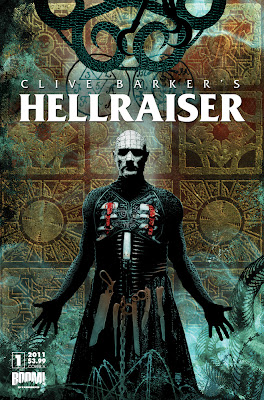 HELLRAISER #1 ships as an oversized 40-page issue in March with A & B covers in a 50/50 split with art by Tim Bradstreet and Nick Percival respectively, as well as a very special 1-in-50 incentive cover with art by legendary master of horror Clive Barker. HELLRAISER: MASTERWORKS VOL. 1 ships in March, featuring the works of Clive Barker, Neil Gaiman, Mike Mignola, Larry Wachowski, Alex Ross, Kevin O’Neill and more with a cover by John Bolton. 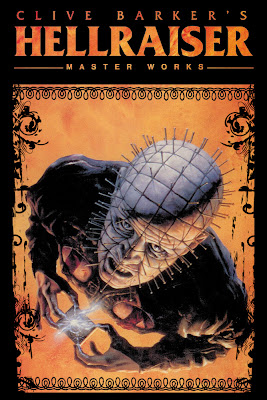 Universal Pictures and Dino De Laurentiis Co. are looking to remake 1984 horror movie Firestarter, with Mark L. Smith on board to write the script. 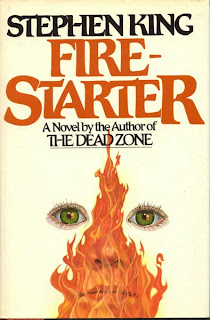 Variety says the studio is aiming to turn the reboot into a franchise property and that "the main character is to be reinvented with a little more edge." 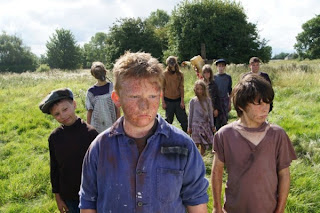 A disparate group of young urban offenders and their care workers embark on a community service weekend in the strange, remote Yorkshire village of Mortlake, which prides on keeping itself to itself. A minor incident with some local inbred youths rapidly escalates into a blood-soaked, deliriously warped nightmare for all involved.

New Clip For "And Soon The Darkness"

Stephanie (Amber Heard) and Ellie’s (Odette Yustman) vacation to an exotic village in Argentina is a perfect ‘girl’s getaway’ to bask in the sun, shop and flirt with the handsome locals. After a long night of bar-hopping, the girls get into an argument, and Stephanie heads out alone in the morning to cool off. But when she returns, Ellie has disappeared. Finding signs of a struggle, Stephanie fears the worst, and turns to the police for help. But the local authorities have their hands full already – with a string of unsolved kidnappings targeting young female tourists. Skeptical of the sheriff’s competency, she enlists help from Michael (Karl Urban), an American ex-pat staying at their hotel. Together they go on a frantic search for Ellie, but Stephanie soon realizes that trusting his seemingly good intentions may drag her farther from the truth. With danger mounting, and time running out, Stephanie must find her friend before darkness falls.

FEAR is written/directed by Corey Logsdon and is a "anthology horror film in the style of horror comics of the 1950's. The film consist of 6 short stories that make up the film."

Fear Trailer from Corey Logsdon on Vimeo.
Posted by A Southern Horror Fan No comments:

New Image from "The Raven"

John Cusack as Edgar Allen Poe in the upcoming psychological/thriller The Raven. 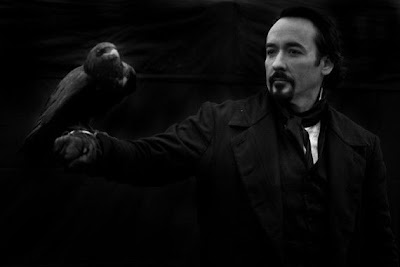 The Raven features Poe who teams up with a detective to search for a serial killer who has kidnapped Poe's fiance and gone on a killing spree which mimics Poe's work. The Raven is directed by James McTeigue and written by Ben Livingston & Hannah Shakespeare, the film co-stars Luke Evans and Alice Eve and is scheduled for a 2011 release.
Posted by A Southern Horror Fan No comments: