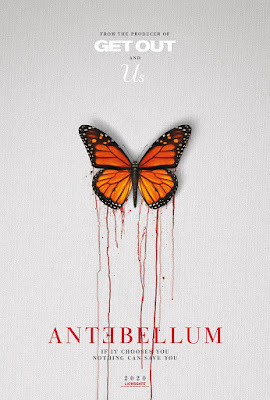 Successful author Veronica finds herself trapped in a horrifying reality and must uncover the mind-bending mystery before it's too late.

Trailer Released For Hulu's "Into The Dark: A Nasty Piece Of Work" 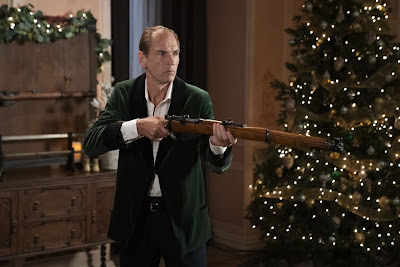 A mid-level employee at a large company finds out he’s not getting the Christmas bonus or promotion he was expecting. But then his boss invites him over for dinner with a proposal for how he can climb the corporate ladder… by beating his professional rival in a violent competition. 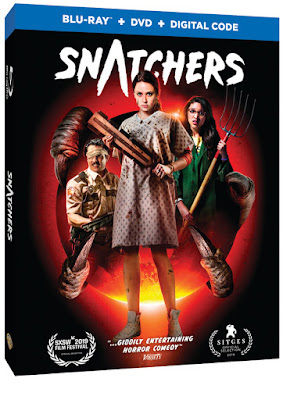 Horror comedy Snatchers is set to be released on digital this January from Warner Bros. Home Entertainment. The film is directed by Cedars and Kleiman, the film is a Stage 13 presentation with award-winning producer Paul Young for Make Good Content production in association with The Olde Money Boyz.  It stars Mary Nepi (Not Cool) as Sara, Gabrielle Elyse (Nickelodeon’s “Nicky, Ricky, Dicky & Dawn,” “The Thundermans”) as Hayley, J.J Nolan (“The Mindy Project,” “Silicon Valley”) as Kate, Austin Fryberger (“Huge In France”) as Skyler, Nick Gomez (“Longmire,” “Dexter”) as Oscar, and Rich Fulcher (“Those Who Can’t”) as Dave.

Senior year is going to rule! Thanks to her relationship with clueless hunk Skyler, Sara is totally in with the cool girls. But Skyler contracted an extraterrestrial bug during his summer vacation. After just one night together, Sara discovers she’s Nine. Months. Pregnant. Desperate to keep her condition on the DL, she turns to the only person she can trust: her nerdy ex-bestie, Hayley. The girls soon realize this alien problem is only just the beginning. Aliens had best beware in this hilarious comedy filled with action and tongue-in-cheek teen spirit.

Snatchers arrives on Digital January 7, 2020, and on Blu-ray and DVD on February 18th. 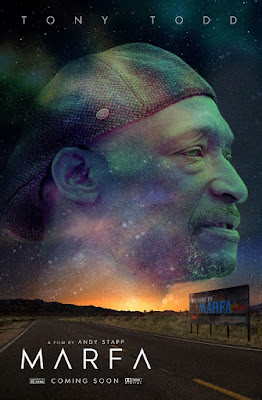 While on a road trip from a long weekend at the Terlingua cookoff, four lifelong friends decide to veer off road and venture into a small West Texas town known as Marfa. What attracted them to do so? Could it be the strange unexplained ghost lights that Marfa is known for? While on a fuel stop they meet two very strange employees of a secluded gas station. One of them offers them a chance to look into their future by pulling a ticket from his counter top 25 cent token fortune telling machine. What does it say? Can they trust it? When they enter Marfa, Texas they realize almost immediately that something's off. Why is this town so odd? Why are very peculiar things happening? Eden Percell, because of her desire to look into everything, begins convincing Erik that the town is full of practicing witchcraft and she even makes the statement "And I think they have gotten dang good at it." Can she convince Erik, and if so, should they risk telling the other 2 drama queens their thoughts. What is Marfa? Why are the townspeople so secretive? Will Matt, Erik, Allie, and Eden discover the truth behind the mystery of the Marfa lights? 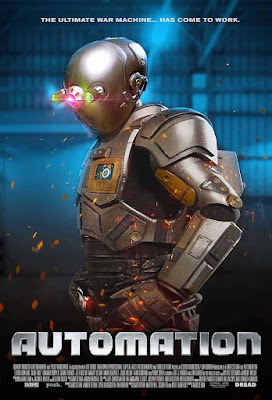 A workplace robot, AUTO, transforms into a killing machine when he discovers he will be replaced by a more efficient model.

Pre-order here
Posted by A Southern Horror Fan No comments: 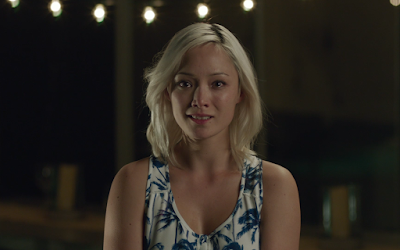 Before she joins Tom Cruise for MISSION : IMPOSSIBLE 7 and 8, "GUARDIANS OF THE GALAXY" star Pom Klementieff heads to the sci-fi realm for 5 GALAXIES, out this December.

Some of today’s biggest names unite with a selection of today’s most visually-gifted filmmakers for a unique cinematic experience that crosses 5 Galaxies! An assemblage of futuristic, high concept stories about artificial intelligence, 5 Galaxies features Pom Klementieff (Guardians of the Galaxy), Eric Roberts (The Dark Knight, “Suits”) and Neil Jackson (“Sleepy Hollow”) in in a powerful profusion of science-fiction, featuring segments from such visionary filmmakers as Nelson Lee, Kristen Hilkert, Amir Reichart, Vitaly Verlov and Marc-Henri Boulier. Whether its love found in time of over-population or exploration of the unknown and space-travel, 5 Galaxies has a bit of something for every fan of the genre. Available on DVD and Digital December 10 from Uncork’d Entertainment. 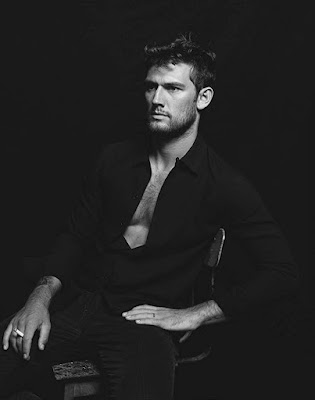 Alex Pettyfer, Mike Vogel , Jacques Colimon and Shakira Barrera will star in COLLECTION, the next feature for actress turned filmmaker Marianna Palka.Palka, a Sundance darling, known for her role on the Emmy winning and SAG nominated series Glow, previously helmed EGG (2018), starring Christina Hendricks and Anna Camp, which premiered at Tribeca to rave reviews.  This is her seventh film since her premiere film, GOOD DICK.COLLECTION tells of a grieving father who grapples with the seedy, manipulative world of high stakes debt collection while struggling to shed the tragedies of his past. He'll find himself pitted against his best friend, his prodigy and his love. The Todd Friedman-penned film begins production later this month in Birmingham, AL. The Warner Davis Company produces alongside Dark Dreams Entertainment.Warner Davis recently produced CAMP COLD BROOK starring Chad Michael Murray, Danielle Harris, and Courtney Gains.
Posted by A Southern Horror Fan No comments: 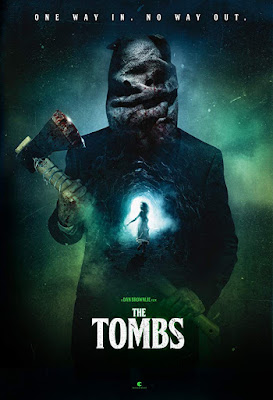 A live streamed, publicity stunt, filmed inside London’s most famous scare attraction takes a terrifying turn as the event awakes an evil spirit. Something relentless and seemingly unstoppable starts stalking the celebrity guests through the claustrophobic halls of this maze of terror. 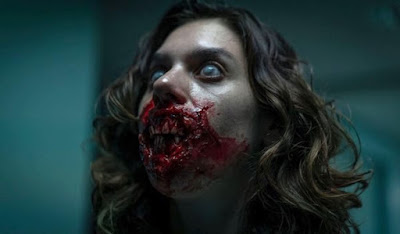 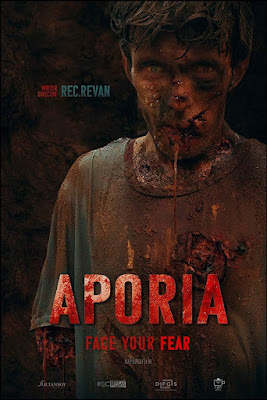 Character posters, movie stills, and a trailer have been released for upcoming zombie horror "Aporia". The Azerbaijan film is directed by Rec Revan, and stars Parviz Ismayilov, Aysel Yusubova, Taleh Memmedov and Mubariz Samadov. Check out the English language trailer below.

Residents of a village are captured by an unknown armed group that starts experimenting on humans. However, the experiments fail. Therefore, the unsuccessful subjects are taken to the top of a mountain to be killed. Two of them, Arvin and Ejla, manage to escape and hide in a nearby pit.

Unfortunately, the escapees are unaware that the deep muddy pit they fell is gradually beginning to turn into a giant grave for the victims of the experiments – who soon return from the dead… 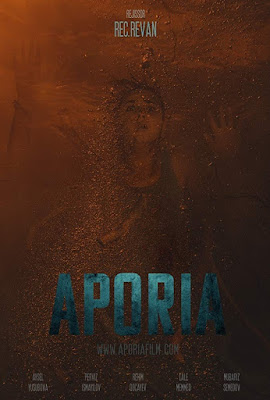 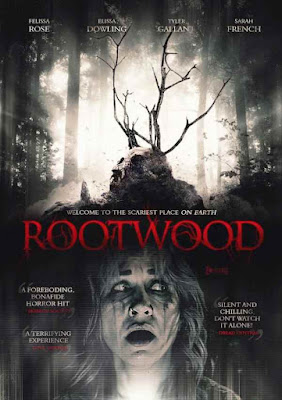 The film follows two students, Jessica (Elissa Dowling) and William (Tyler Gallant), who host “The Spooky Hour”, a podcast about paranormal phenomena and urban legends. When they are hired by the Hollywood film producer Laura Benott (Felissa Rose) to produce a horror documentary about the curse of the wooden devil, they smell a chance to become famous. Together with their friend Erin (Sarah French) they enter Rootwood Forest and investigate the area to find out the truth about the wooden devil and his victims. 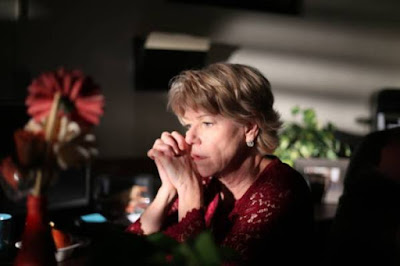 Brian is a disturbed child with sociopathic tendencies dealing with a father who doesn’t love him, a mother unconvinced of his violent nature, and a newly adopted sister he believes is there to replace him. After a series of escalating violent incidents, he is bounced around from failed therapist to failed therapist, maturing into a young man still unable to escape his anger issues. When his life eventually falls apart by his own choices, Brian blames his series of failed therapists, embracing his dark nature and taking his revenge on everyone who ever wronged him – one by one, finally understanding that accepting who you are inside can be the best therapy. 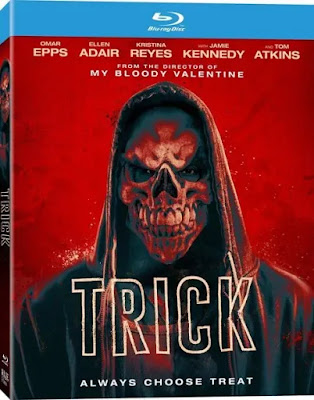 RLJE Films, a business unit of AMC Networks, will release TRICK on December 17, 2019 on DVD and Blu-ray. TRICK features Omar Epps ("House"), Ellen Adair (“Homeland”), Kristina Reyes (“Blindspot”), Jamie Kennedy (Scream franchise), and Tom Atkins (Escape From New York). Directed by Patrick Lussier (My Bloody Valentine, Drive Angry), he co-wrote the film with Todd Farmer (My Bloody Valentine, Jason X). RLJE Films will release TRICK on DVD for an SRP of $27.97 and on Blu-ray for an SRP of $28.97.

On Halloween night in 2015, Patrick “Trick” Weaver massacred his classmates at a costume party. After being arrested, he managed to escape police custody, but not before being shot five times by Detective Mike Denver (Epps). Everyone believes Trick must be dead, but when a masked killer reappears the following Halloween, and every Halloween after that, they realize the nightmare is not over. With Trick wreaking havoc and killing innocent people in increasingly terrifying ways, Denver will stop at nothing to finish what he started and bring the carnage to an end.


TRICK DVD and Blu-ray include the following bonus features:
Posted by A Southern Horror Fan No comments:

'THE LOST FOOTAGE OF LEAH SULLIVAN'- COMING TO THEATERS THIS WINTER 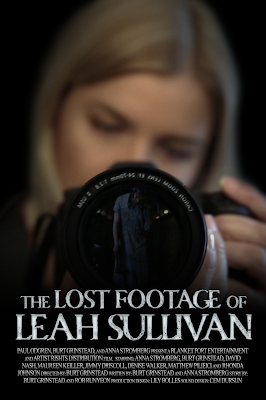 This December, The Lost Footage of Leah Sullivan will be finally uncovered.
Starring Anna Stromberg and directed by Burt Grinstead, the highly-anticipated found-footage spookfest fixing on the frightening contents of an unedited memory card, has been acquired for release by Artist Rights Distribution.
A young journalism student decides to return to her hometown to investigate a brutal murder that took place 30 years prior. Without much hope of finding any real answers, she interviews a series of local characters, all of whom leave their own bewildering take on the legendary Mulcahy Murders in her student film. As the facts unravel, she begins to realize that this cold case murder, may not be so cold after all. Along with the help of the handsome deputy police officer, Patrick Rooke, she begins to uncover the horrifying truth of what really happened that night thirty years ago. As she gets closer to discovering the truth, she edges even closer to her own demise. Will her blind ambition overtake her desire to survive?
The film, written by Burt Grinstead and Stromberg with original story by Burt Grinstead and Rob Runyeon, stars Stromberg, Burt Grinstead, David Nash, Maureen Keiller, Denise Walker, Jimmy Driscoll, and Matthew Pelieci.

The world theatrical premiere is set for Wednesday December 11 in L.A. The screening, which will be attended by cast and crew, is open to the public. Further theatrical screenings for Winter will be announced shortly. Buy tickets here. 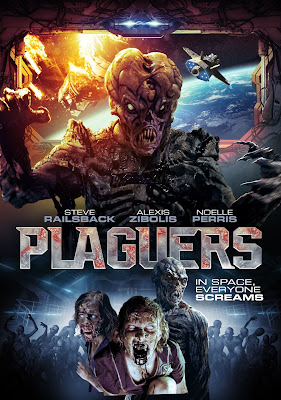 Brad Sykes’ cult classic PLAGUERS is now available for the first-time on Blu-ray and DVD from Wild Eye Releasing.

The 10th Anniversary edition includes audio commentary and an unseen Q+A with cast and crew.

When an alien contagion is released aboard a spaceship transforming its victims into demonic flesh-eaters, the crew must either destroy the infected or join them. Steve Railsback stars.

The title is also available on digital.