My Review Of "Cry Havoc" 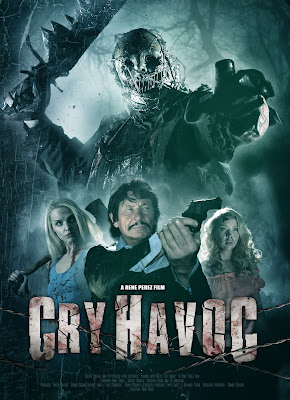 An ambitious young reporter is granted an interview with one of the FBI’s most wanted. While entering his compound she finds one of his prized possessions, a serial killer who murders at call, called HAVOC. Her only hope is a rogue police man searching for his daughter.

Rene Perez packs a lot in this multilayered hybrid horror. There are elements of "not without my daughter" story points, dark web inspired "games madmen play" evilness and traditional slasher carnage. Where a lot of directors fail to maintain this level of storytelling, Perez manages to hold control and really bring the vision to life. The film isn't perfect, some aspects drag on the crescendoing energy, but so much more works wonderfully.

The elements of "Cry Havoc" that I didn't get into are few. The film starts off with a bloody bang that really sets the tone and let's you know what to expect. However the introduction of the story that deals with a sort of dark web investigative aspect seems a bit over dramatic and caricature. Honestly, I believe that was the only real problem I had with the film. The bulk of the film is a joyful reign of blood.

The horror elements in "Cry Havoc" are a wonderful reminder of what has always made slasher movies so great. The kills are full on visceral moments filled with blood splatter all done using practical effects. The masked unstoppable killing machine is formidable, memorable and intimidating. A cross between Leatherface and Jason Voorhees.

Overall "Cry Havoc" is a fun slasher that both entertains and excited. There is some slight drag in the storytelling were exposition and dialog is concerned. However it is minor considering how much of the film is filled with action and carnage. A few characters seem too contrived but for the most part this film has too many gory death scenes not to enjoy. Definitely check it out. (4/5)
Posted by A Southern Horror Fan 2 comments: