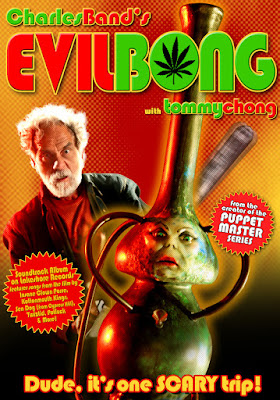 Charles Band , the visionary creator of cult classics Trancers and Puppet Master, invites you to take another hit of the Evil Bong. Evil Bong High-5, the latest in Full Moon Features’ smokin’ comedy series, premieres on DVD June 22.   EeBee the Evil Bong is back and she’s stoner… er… stronger than ever. With Larnell, Sarah Leigh, Rabbit, Velicity and a lobotomized Gingerdead Man trapped in her dastardly web of weed, The Bong World, for good, she once more sets about her plan of world domination. This time, one toke at a time. EeBee has outsmarted everybody who has outsmarted her.  She teleports our hesher heroes back to earth to sell her magic ganja. But our bevy of baked soldiers, with the help of Hambo, the Badass Dolls and tons of surprises, have plans of their own and wage full-on guerilla weedfare. It’s up to our dopes to figure out Eebee’s new rules and stop her before humanity goes up in smoke. In the end, will our waster warriors celebrate with a HIGH-5? Or will they be down low and too slow? 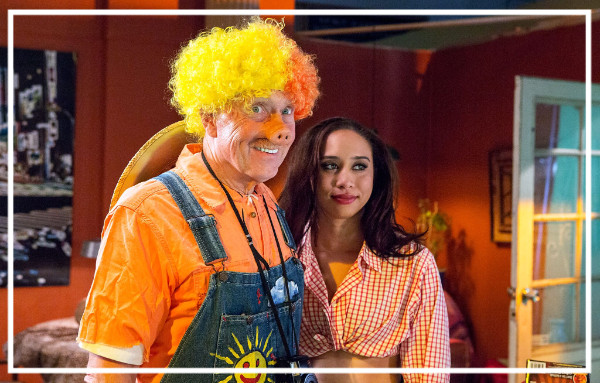 “The film’s been done for about a year and a half,” says El Rey when asked what the hold-up has been.  “There’s been a lot of behind the scenes nonsense but regardless of the outcome, you will see the film this winter whether it’s their release or mine.  We have some incredibly awesome fans and diehard gore-hounds that have been following the release news religiously and my goal since the beginning has been to satisfy them.  They’re the reason I make the AXEMAN films.”

Production stills released along with the trailer reveal additional characters not shown previously.  With 27 speaking roles in the film, what separates this film from the original other than the number of characters?  “The difference between this film and the original is the sheer abundance of talented actors and outlandish characters.  Each character and actor could carry their own film,”  Theney says.  “Without revealing too much, 'Mrs. Whitfield' played by the talented Monique Parent holds the key to understanding why the Axeman is back and how to stop him but she has her own reasons for not divulging it.  Michael Foster is 'Polk Talbert,' the original suspect believed to have given the Axeman legend it’s bloody beginnings.  And ‘Kesha' played by Hannah Landberg will definitely be a fan favorite as the sister to one of the victims from the original film who is probably more savage and frightening that the Axeman himself.”

Synopsis:
When a band of crazed evangelicals, bank robbers and vigilantes descend upon Cutter's Creek, there's only one local legend that can separate them.  And dismember them.