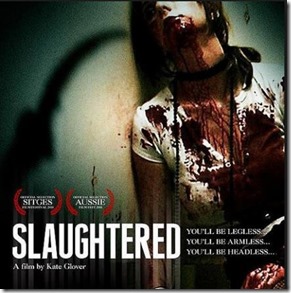 “Slaughtered” is an Australian slasher directed by Kate Glover and stars Chloé Boreham, Erica Baron, Marc Kay, James Kerley and Steven O'Donnell. The story follows the employees and patrons at a pub who are faced with brutal slayings at the hands of a homicidal maniac. One by one employees and alkies alike get sliced, dismembered and drained by a unstoppable masked slasher in a pretty standand ‘set-em-up-knock-em-down’ story.

As far as the story goes for “Slaughtered” I am still not sure what the true motivation for the massacre is. There are mumblings and blurbs that elude to some sketchy past with the bar but nothing ever comes forward definitively. That doesn’t really hinder the over all story arch from one aspect to the other more gruesome fright-fest moments in the film but it would have been nice to be let in on the plot a bit more. The acting was decent, melodramatic and at times created a very stoic atmosphere as far as connecting with the characters. A lot of horror fans would find that bothersome but it just allowed me to enjoy a film that was all about the death scenes and blood splatter. A true visceral slasher that is both contemporary and classic.

The effects of the film where credible, however limited. There wasn’t a major celebration of grue in the film but there was enough to entertain the slasher fan. The slasher character was commanding on screen and very creepy to watch. An emotionless form of blood-lust and rage. He had no remorse in his killing frenzy and was very reminiscent of such film slashers as "Ben Willis” as well as hints of the  “ Babyface Killer” . His kills were not all that creative preferring to just slice or gore his victims but there was a couple of creative death scenes in the film. A lot the stuff may not have been plausible but it is slasher fiction so does it really need to be?!

Over all “Slaughtered” was an entertaining slasher flick from down under with a good amount of blood flow. The story was simple and will not appeal to viewers seeking depth or stronger meaning in their horror stories. As I said I still have no real clue why the killer killed other than the fact that the killer liked to kill. The sound track and the effects are worthy aspects to the film and all though the characters lack luster or strong emotional connectivity they still emote enough to hold what little story there is together. I liked “Slaughter” and it is a cool, simple slasher film that will work great during the Halloween slasher flick rich season of horror entertainment.
Posted by A Southern Horror Fan