Get Ready For “The Pick-Axe Murders III: The Final Chapter” 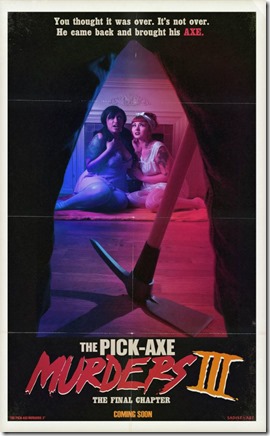 “The Pick-Axe Murders III” is a love-letter to the slasher films from the 80s, when boobs and blood flew with reckless abandon. Sounds hot – right! Well as stated on the Indiegogo page. Part three is the biggest and best boobie bloodbath of the trilogy so if the  guys are only gonna get one shot to make a film of this story then Part III is the film they are gonna make.  Personally I hope it is just the beginning because everything just seems right with this project. “Pick-Axe” comes from the minds of First Week of Winter Films’ Jeremy Sumrall. The campaign still has 9 days left so head over and see the perks – one of which is a big-ole uncensored version of the opening scene filled with the punch-line of the projects homage celebration.-(blood and boobs). The cast includes Tiffany Shepis, Jayson Champion, Kelly Byrns, Keefer Barlow, Lyndsey Case, Amy Rene LaFavers, Cory Ahre, Roxy Vandiver, Gage Tijerina, A. Michael Baldwin-to name a few.

In the summer of 1982, a group of campers was horribly slaughtered at Camp Arapaho in the sleepy little town of Woodland Hills. The 10 gruesome murders were blamed on Alex Black, a mysterious man believed to have been the son of Satan himself, whom the townspeople had hunted down and lynched nearly 20 years prior. A young woman named Adrienne was able to defeat Alex and put a stop to the killing spree.

One year later, a series of mysterious killings at the Meadow Falls Sanitarium (where Adrienne had spent the last year as a patient) was once again linked to the mysterious Alex Black. Twenty patients and staff members were horribly slaughtered in increasingly graphic and brutal ways. In the end, a young man named George Miner, along with Adrienne, was able to defeat Alex Black, sending him back to the foul hell from whence he came.

For five years, Alex Black has been silent, and the town of Woodland Hills has been peaceful. However, tonight is the night of the death moon, and someone has found a way to bring Alex Black back to life...
...and Alex will not stop until he paints the town blood red.