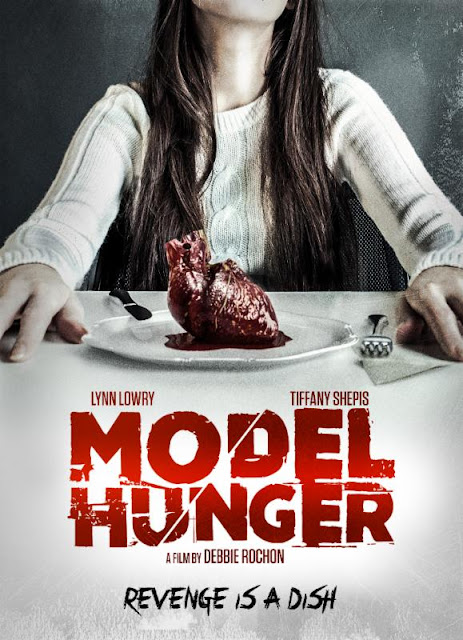 Former pinup model Ginny (Lowry) had been cast aside by the heartless and exploitative modeling industry.  Ginny didn't take rejection well and grew into a revenge-seeking, bloodthirsty, broken woman. When her new neighbors Debbie (Shepis) and Sal (Capobianco) move in, Debbie begins to notice strange things going on. Sal believes she is mentally unstable, but Debbie becomes determined to figure out what secret life Ginny is leading. Her new nosy neighbor throws a damper on Ginny's private life: her cannibalistic addictions and ever-growing body count. Both women become determined to put an end to the other's obsession.

Tons Of Visuals For "The Corpse Of Anna Fritz" 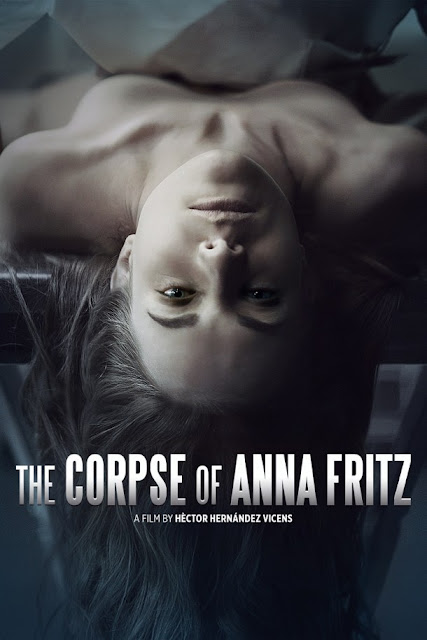 Tons of visual goodies have been released for "The Corpse Of Anna Fritz". The film is set to stream exclusively on FlixFling.com on March 8th. " The Corpse Of Anna Fritz " is directed byHèctor Hernández Vicen and stars Alba Ribas, Cristian Valencia, Bernat Saumell, and Albert Carbó. Check out the Poster, Trailer, and Images for the film below.

Anna Fritz is a very famous and beautiful actress, considered one of the most desired women in the world. Suddenly, she dies. Pau works as an orderly at the hospital where Anna Fritz was taken to. Pau is a shy and introverted youth. Often, when the body of a young woman is brought to the morgue, he can’t resist watching her. When he enters the morgue with the corpse of Anna Fritz, he takes a picture of her naked body and sends it to his friend Ivan. Ivan and Javi are Pau’s only friends, and go visit him at the hospital. They are a little drunk and Ivan wants to see the naked body of Anna Fritz. She is there… They can’t lose this opportunity. 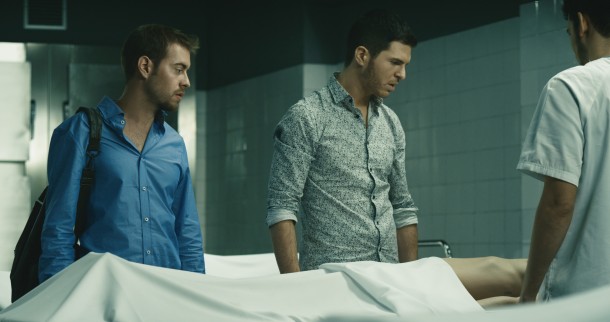 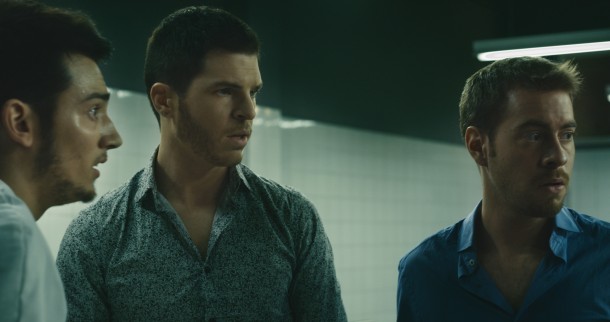 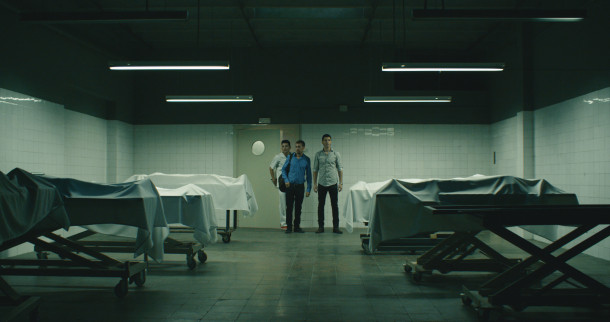 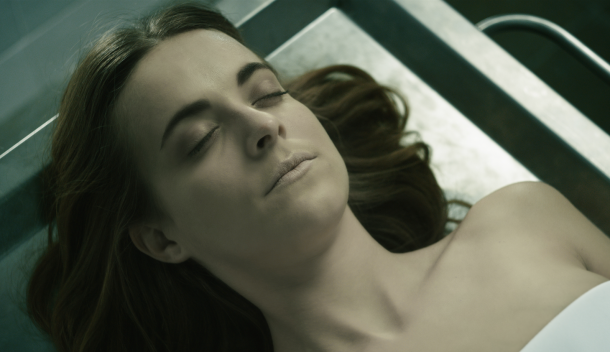 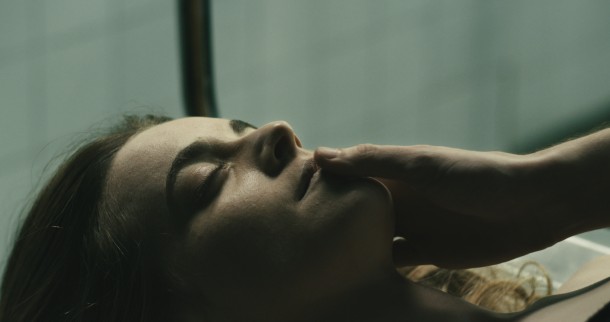 NewPoster Revealed For Amityville: The Awakening " 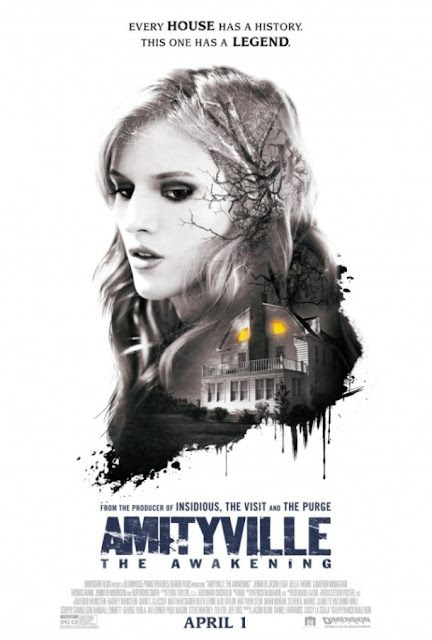 Belle, her little sister, and her comatose twin brother move into a new house with their single mother Joan in order to save money to help pay for her brother’s expensive healthcare. But when strange phenomena begin to occur in the house including the miraculous recovery of her brother, Belle begins to suspect her Mother.

DVD/ Blu-ray Release Of "Return Of The Killer Tomatoes" 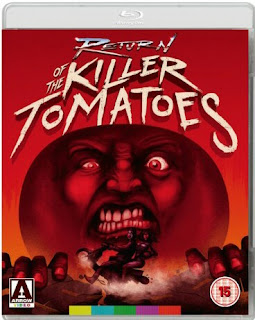 Press Release:
The killer tomatoes are back! But this time around, they’re going to have to contend with late ’80s George Clooney and his wicked mullet… Is it a fruit? Is it a vegetable? Nope, it’s Return of the Killer Tomatoes! Arrow Video will release "Return Of The Killer Tomatoes" in UK on June 27, 2016, and then on June 28, 2016 in US.
Ten years on from the Great Tomato War, mankind lives in fear of another uprising by the waxy red menace. Meanwhile, Professor Gangreen – played with gusto by the great John Astin from TV’s The Addams Family – sets out to pursue his own evil ends by creating a burgeoning army of tomato militia men (who, somewhat conveniently, look just like regular men).
Following on from the 1978 cult classic Attack of the Killer Tomatoes, Return of the Killer Tomatoes came armed with a healthy sense of its own ridiculousness and would expand upon a franchise that now comprises four films, two TV series and a video game. So what are you waiting for? Make Return of the Killer Tomatoes one of your five-a-day now!
Special Features: 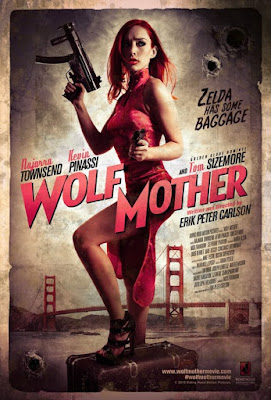 Press Release:
Riding Hood Motion Pictures will release the haunting first look teaser trailer of the noir crime thriller, Wolf Mother. The cross genre film, which is written and directed by Erik Peter Carlson (The Toy Soldiers) stars: Najarra Townsend (Contracted), New York stage actor Kevin Pinassi, star of David Lynch’s “Twin Peaks” revival – Tom Sizemore, (Saving Private Ryan), ex-con actor Dave Vescio (Hick) and horror genre star and veteran Maria Olsen.
The 1 minute teaser will reveal the first glimpses of our heroes, Townsend and Pinassi, as they mastermind a scheme to find the celebrity child star, Kaitlin Miller, played by newcomer, Kaegan Baron. With gorgeous noir photography, the teaser explores the horror and suspense of their journey, as well as a peak of the Mansonesque clan behind the kidnapping in the captivating opening moments.
Carlson says of the film’s plot and its relevancy: “I’m drawn to stories that in someway are connected to the current state of mind. Stories that are happening now, in our own backyard. Most of the time for me, they just happen to be the darker stories.” Some of that darkness can be seen right now, in the film’s first trailer.
Posted by A Southern Horror Fan No comments:

Crowd funding has kicked off for VHS throwback creature feature "mutANTs". The film is a speciality sci-fi b-movie aimed at low budget Indie horror fans with a love of VHS-video shot productions. " mutANTs" is being shot on a 1989 Panasonic camera. The campaign is taking place over on Indiegogo. com. 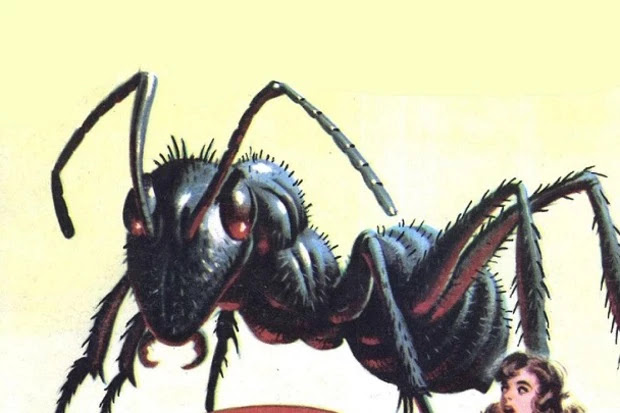 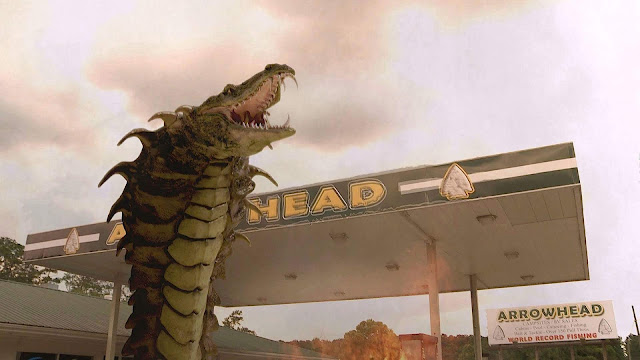 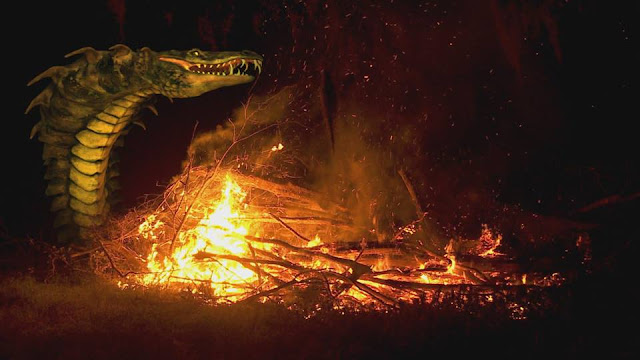 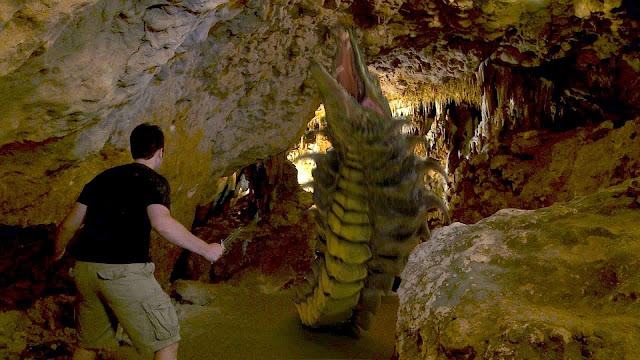 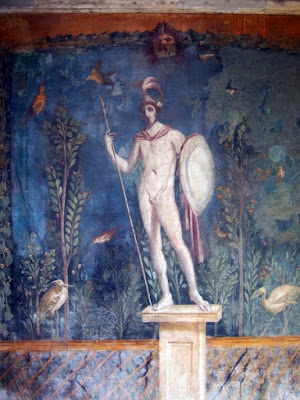 Mars was considered the father of Romulus and Remus, the mythical twin founders of Rome. According to the story, their mother, the Vestal Virgin Rhea Silvia, was raped by Mars while she slept, and in her dreams she had a vision where she dropped a hairpin to the ground, and from which there sprang two twin trees. Over time one of the trees grew so large that it covered the entire world with its shade, a reference to the ultimate success of Romulus and the growth of the huge Roman Empire.

The month of Martius (March) was named after the god. Important festivals and ceremonies, usually connected to the preparation and closure of military campaigns, were held in honour of the god in March and October and carried out by Mars' specially dedicated priests, the flamen Martialis. These rites may also have been connected to agriculture but the nature of Mars' role in this area of Roman life is disputed by scholars. The first festival of the year was actually on the 27th of February with the first Equirria, then followed a busy March. There was the feriae Martifestival, held on the 1st of March (the old New Year's Day), the second Equirria on the 14th, the agonium Martiale on the 17th, the Quinquatrus on the 19th (in later times Minerva would assume Mars' role), and the Tubilustrium on the 23rd of March (and again on the 23rd of May). The details of these festivals are sometimes sketchy, but most were related to war and the instruments of warfare.
Posted by A Southern Horror Fan No comments: 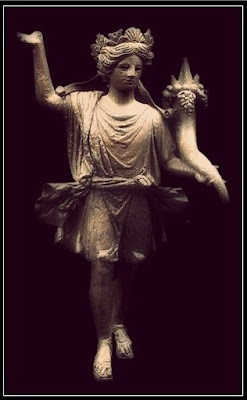 Today is the day that belongs to Mars, the god of war. Why do you think it is called March?! Anyway today the day we pay tribute to our household gods, spirits, and ancestors (The Lares).Lares (/ˈlɑːriːz/, singular Lar), archaically Lases, were guardian deities in ancient Roman religion. Their origin is uncertain; they may have been hero-ancestors, guardians of the hearth, fields, boundaries or fruitfulness, or an amalgam of these. Lares were believed to observe, protect and influence all that happened within the boundaries of their location or function. The statues of domestic Lares were placed at table during family meals; their presence, cult and blessing seem to have been required at all important family events. Roman writers sometimes identify or conflate them with ancestor-deities, domestic Penates and the hearth. Because of these associations, Lares are sometimes categorised as household gods by some.