Don’t We All Feel A Little Tortured? 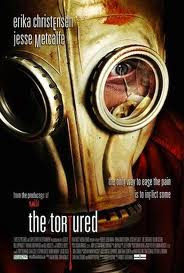 Not as literal as what this post is about but my way of tying in this movie. IFC Midnight Presents “The Tortured” . The film that is directed by Rob Lieberman and stars Erika Christensen and Jesse Metcalfe will be available Digitally nationwide, VOD Friday, May 11th 2012. It hits theaters later on June 15th.


Craig (Metcalfe) and Elise (Christensen) had all the ingredients for an ideal life: a great marriage, a wonderful five-year-old son, a charming home and a bright future.
Then, on one sunny day, their perfect world is irrevocably shattered . Leaving their five year old son, Ben, alone for only a moment, Craig is horrified to see him being abducted from their own front yard. Sadly, the desperate police search for the kidnapper proves to be in vain when the child is found dead. Craig is wracked with guilt and Elise cannot forgive him. Their relationship crumbles under the strain and Elise moves out – leaving each of them alone in their private hell.

Months later, a chance tip leads police to the suspect’s door, catching him red-handed with another victim. Although Ben’s murderer is soon brought to trial, the grieving parents are stunned when his sentence is considerably reduced by a plea bargain. Utterly shocked and reunited by their outrage, Craig and Elise agree that they cannot live another day until they rectify this miscarriage of justice. Together they decide to seek their own retribution, hatching a plot to kidnap the man and subject him to the same monstrous acts he perpetrated against their helpless son.

check out the trailer exclusively at Hulu.
Posted by A Southern Horror Fan