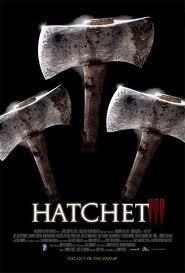 Derek Mears (Friday the 13th), Caroline Williams (The Texas Chainsaw Massacre 2), Sean Whalen (Laid to Rest), Diane Goldner (The Collector), and Jason Trost (The FP) will be joining Kane Hodder as well as Danielle Harris to round out the cast for the third film in the Hatchet franchise. The most well received new horror franchise out there. Great stories, kick ass casts and buckets of blood splattered death scenes by one awesome horror fan Adam Greene who just happens to be one awesome entertainer as well as a great director. Can you tell I have a crush on the guy.

Although Adam has handed over the director’s chair to BJ McDowell for “Hatchet III” he will still be pretty involved in the project. Here is the synopsis for the third installment that is slated for release in 2013.

“The new movie continues where Hatchet 2 left off, as a search and recovery team heads into the haunted swamp to pick up the pieces and Marybeth learns the secret to ending the voodoo curse that has left Victor Crowley haunting and terrorizing Honey Island Swamp for decades.”
Posted by A Southern Horror Fan