A lot of people consider this one of the worst horror movies made in the 80’s but for me Charles Martin Smith’s 1986 metal anthem from hell “Trick or Treat” is one of the best to come out of the 80’s. The film was obviously meant as a teasing “fuck you” to the PMRC and those Christian groups who felt metal music and horror movies were destroying American values. This film was a battle cry for all kids who cherished the metal sound as well as the gore driven cinema experience to wake up, fight back, and be heard in society before it was too late. 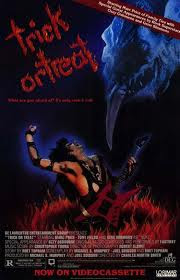 The story follows Eddie Weinbauer a teenage outcast with long hair, earrings, and an obsession with heavy metal. His favorite rocker is Sammi Curr (what a fuckin’ awesome name. I wanted that name after I saw this movie.)  Who dies in a fire while recording his latest album. During the coarse of the movie Eddie is constantly being bullied by the “preppies” in the school. He also longs to be with one of the popular girls. His only solace is his stereo and his metal music.
This movie is about my life, except I was out of the closet in school so no pining over the popular chick for me. It was one of the school football stars. I was bullied in school but dealt with it the same way Sharon Needles did- freak them the fuck out! That is just what I did. I blended heavy metal trash glam with Bowe inspired androgyny. I also fought back. Anyway enough about my child hood shit. Back to “Trick Or Treat”.
Mysteriously Sammi Curr’s last album is sent to Eddie and upon listening to it some massive supernatural shit starts to happen. Eddies life seems to be on an upswing but unfortunately there are sinister motives behind the positive turn in Eddie’s life. Sammi wants to be an immortal rock god and a few sacrifices are just what he needs.
In this film there so many things that make this movie really rock. For instance both Ozzy and Gene Simmons are in the film. The kill scenes are creative. There is ears melting to headphones while some slow erotic metal instrumental plays out. There is an iconic homage to “Carrie” in the school dance scene where Sammi Curr begins the massive sacrifice of all Eddie’s class mates. Plus the whole relationship on screen between Eddie and Sammi is one of the most dynamic acutates with an almost homoerotic subtext between the two characters. Sammi Curr practically eye fucks Eddie in almost every seen they are together in. Of coarse it is only because Sammi has an ulterior motive but I felt the connection between them damn it. The final reason this movie rocks for me is the killer soundtrack. Fastway gives the movie an almost operatic seduction with the deep bass and heavy drum beats that almost seem to drag as if played at half speed. It is an intended effect meant to accentuate how music can almost become hypnotic, taking over a person or atmosphere.
“Trick Or Treat” is an underrated gem that should be coveted. I still to this day watch it several times over each year plus the soundtrack is still in my mp3 player. Whether or not anyone agrees with me or not this film spoke to me and my generation of outcast metal head horror movie fans. It will always be on of my top ten of a lifetime films.