“The Last Sacrifice” Has Completed Production 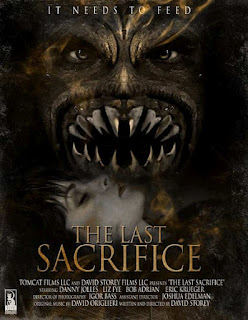 “The Last Sacrifice” from Tomcat Films has been one on my radar for a few months now. I love me some demon-y creatures and this film looks to be a fun trip into a hellish dimension. The production has just completed on this horror throwback to films like “Night Of The Creeps” and “Demons”. Directed by David Storey this horror flick stars Danny Jolle and Liz Fye. Check out the trailer below…

Somebody killed the party… that’s what Silas and Babs remember from last night’s party. The story of the monster that kills children and feeds on Sacrificial Freshmen.
But now they’re awake the morning after only to find that the party the attended supposedly occurred five years ago and every student that attended the party has not been seen since.
Trapped by a bereaved father named Shishio, and Ex-Biology teacher named Gideon and a homeless priest named Dedalus; Silas and Babs must figure out what happened at the party, or suffer the same fate as their classmates.