We are all familiar with how awesome some Asian films can truly be but have you ever considered them as horrifically funny as well? Lately Pan Asian horror films have been slowly catching up to western cinema and cashing in on the overtly hilarious style of horror/comedy. Which brings me to this little gem from Japan. 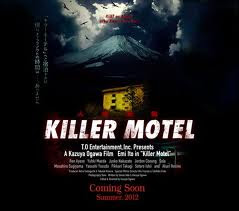 On your next visit try staying at a killer hotel. Check out this cool trailer for Kazuya Ogawa’s “Killer Motel”, and remember “Don’t eat the mushrooms”.

“There is a Japanese style inn located in an out-of-the-way area near Mount Fuji. No one knows if it’s in business or not, but the inn is owned by two people: the expressionless host, and his bewitching daughter.
The host lures six patrons to stay at his inn for one night. All the guests feel the inn has an odd feel to it, but none of them pays attention to it in particular.
In reality, the host and his daughter have a hidden agenda. They are hunting in order to feed the host’s son: a huge living zombie hidden away in a locked room, whom these cruel hunters dote on as if he were still part of the family.
A twisted tale illustrating conflicts of consciousness, cold-blooded insanity, and the depths one will sink to for the love of one’s family is about to begin…”