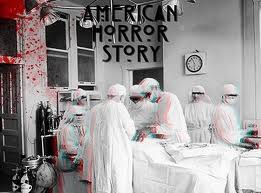 60’s style?! So that can only mean more sex, nudity and drug use, hopefully.
Interview with Vulture, Murphy  revealed the upcoming story arc will be set in the '60s.

"It’s set in an institution for the criminally insane that Jessica Lange’s character runs, which is a really, really, really fun thing to do because you can write all these people locked up in it. And I guess if the first season was about infidelity, the second season is about sanity. What makes someone sane or insane? Sometimes the people you think are insane are actually the most sane of all. It’s fun to write about people who society throws away.

I haven’t said this publicly, but the new season is set in the sixties and Chloë Sevigny, for example, plays a character who was put in an asylum because she was a woman who likes sex, so her husband sends her away. At the time, you were able to put people away for that. Another character is institutionalized for being a lesbian. To me, there’s nothing more scary than somebody coming to you and saying they’re going to take you away and put you in a mad house and you have no legal rights and there you shall stay till the end of your days. That is a real horror. Everybody has felt people thinking, "You’re fucking crazy." Even somebody saying that to you is scary."