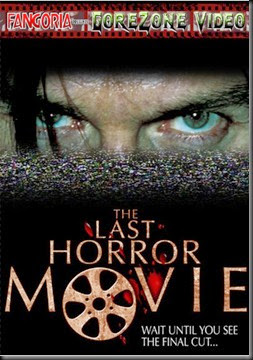 “Shiver” director Julian Richards 2004 cult hit “The Last Horror Movie” will be re-released on DVD/VOD in the US and Canada on August 26th 2014 by MVD. This special collectors edition includes a directors commentary, behind the scenes footage, deleted scenes as well as trailers for Richards other award winning features including “Darklands”, “Silent Cry” and “Summer Scars”.

“The Last Horror Movie” is about ordinary madness caught on camcorder and takes reality TV to its very limits. Silver-tongued serial killer Max Parry invites us to watch as he shoots a fly-on-the-wall documentary about his working practices. Billed as "an intelligent film about murder", it's a snuff movie showcase of his greatest hits overlaid with his suave, amoral commentary about the nature of killing. Max is a middle-class suburbanite who shoots wedding videos by day and snuff movies by night. A remorseless psychopath with a flair for self-promotion who wants to prove that we're all capable of murder.

"It's great to see the film getting a re-release" said Richards " and it will be interesting to see how todays internet savvy audience will react to some of the ideas explored in the film. If Max is still out there, somewhere, I'm sure he's now using social networks to lure his victims".


'Takes the notorious home invasion scene from HENRY and multiplies it by 10'
—Tony Timpone, Fangoria