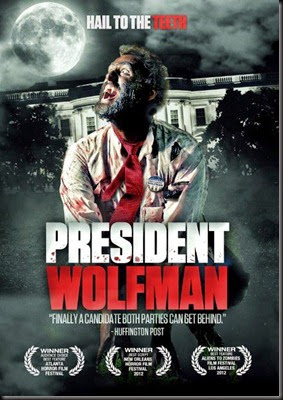 Check out the trailer for Wild Eye Releasing’s “President Wolfman”. Wild Eye announced the North American DVD release for the film will be August 26th, 2014. “President Wolfman” stars Marc Evan Jackson, Paul Alvarez, Ashley Ann, and Anthony Jenkins. It is a unique project made up of stock footage and public domain material edited into a feature film with a re-voiced soundtrack added for the dialog.

Meet John Wolfman - politician, single parent and werewolf. A man whose (hairy) hands are definitely full. Not only is he trying to stop his opponents from selling the US to China (by way of the controversial CHIMERICA Bill), but also solve a series of grizzly murders in the capitol. Add to this a crazed Mad Scientist, Smokey the Bear, a Miss Teen Beauty Pageant and a race against time to save his 8 year old son Bobby Wolfman from a murderous Vice President, and you have a movie that will keep you howling.