My Review Of “Mine Games” 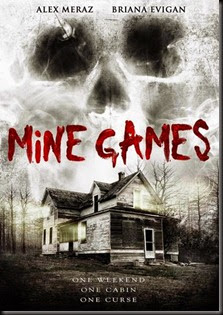 “Mine Games” creates a strong story that manages to be chilling and intense. There is no lag in the time span from when the film starts to when the action begins. The film isn’t an all out high production thrill ride but it maintains a steady, entertaining pace filled with creepiness, and excitement. The style is pretty standard as far as horror direction and character definition but the unique blended nature, adding time/space situation on top of mythology, keeps the “cabin in the woods” set-up from being cliché or boring. “Mine Games” offers a more cerebral nightmare that never looses total cohesion.

The cast deliver pretty believable characters, they are stereotypes scene in horror, however Gray and the writers give enough material to allow the characters feel authentic, convincing, and relatable. The acting never becomes stale or over-drawn. A lot of horror films either play up the clichés until they look clownish or create characters that not even fiction could make believable as friends. “Mine Games” keeps the relationships and social dynamics even keeled enough to make, both the group, as college friends, and the individual interactions seem plausible.

The special effects utilized in “Mine Games” are tight. There isn’t an exploitative nature to the gore or deaths, but what is scene on film comes across realistic looking. The shadowy nature and fact that almost all of the scenes are in nearly dark areas, or at night, gives the film most of it’s spooky quality. The cinematography hearkens back to more traditional methods of straight cam shots, light inflections and natural third person views. With all the gimmicky, modern methods of handhelds, shaky cam shots, or first person view points, it is nice to see some aspects of classic horror story telling style still used. Not that I have a problem with fresh, innovative filming techniques like first person POV or found-footage.

Overall “Mine Games” gives us a great nightmare scenario that is well executed. The story is creepy, creative and cerebral. It will not appeal to all horror fans, and there is plenty to get the intellectuals stirred up, with the whole time/space-Ouroboros aspects of the story. Personally I spent a lot of the film wondering what exactly was the real deal happening- was it a “Soul Survivors” situation or was it a take similar to “Triangle”. Once I caught up with the true nature of the hell these guys were dealing with I was still compelled to the story. It does weaken a bit toward the end after the big reveal. Not much though, and the time until the ending-when it all becomes clear- isn’t all that long, so “Mine Games” works pretty much from start to finish.
Posted by A Southern Horror Fan