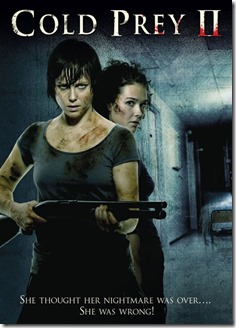 “Cold Prey II” has released a new clip for the sequel to the franchise along with release date news. Scream Factory will be releasing “Cold Prey II” on DVD April 23rd, 2013. So it looks like the film has finally gotten it’s long awaited U.S. release date! (I here if you go “region free” you don’t have to wait so fucking long for shit!) The film was directed by  Mats Stenberg and stars Bolsø Berdal, Marthe Snorresdotter Rovik, Kim Wifladt, Johanna Mørck, Fridtjov Såheim, and Per Schaanning.

Having survived the hideous ordeal in the Jotunheimen mountains in which four of her friends were murdered, the badly injured Jannicke is brought to the local hospital, along with the body of the vicious mountain man whom she’d killed. But when she wakes up in the hospital, the building is dark and deserted…and she soon realizes that her nightmare is not yet over.