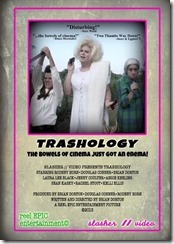 Brian Dorton’s Trashology comes out on DVD March 31st 2013 courtesy of Slasher//Video.  The side image is from the anthology’s insert artwork. Below you will see the actual DVD cover art and details about this awesome little piece of Indie trash! The film stars Rodney Horn (Geri Horn), Douglas Conner, Brian Dorton, Laura Lee Black, Jenny Coulter, Angie Keeling and Sean Kasky. College student Tracy (Laura Lee Black) has just received an assignment to write a report on her favorite film genre. In her research she discovers a book, now Tracy is taken into three interlocking tales of the unexpected.

First in THE VAT, two women (Jenny Coulter / Rodney Horn) are harassed by a jealous fanatic (Angie Keeling) about their worldly ways. When the bible thumping hypocrite threatens violence, chaos takes it's toll. Next in BIG DEBBIE, a robust woman (Rodney Horn) is abandoned at the altar, she runs into two guys that use her to fulfill their odd sexual fetish. When one accidentally dies, they're forced to get rid of the body... the only problem: a woman on the edge (Rachel Stout) witnesses the ditching and blackmails them into killing her cheating girlfriend (Kelli Ellis). Finally in INGLOURIOUS BITCHES, a quirky pair of female vigilantes (Douglas Conner / Brian Dorton) use an app on a cellphone to track down and murder sex offenders. You can read my review of the film here. 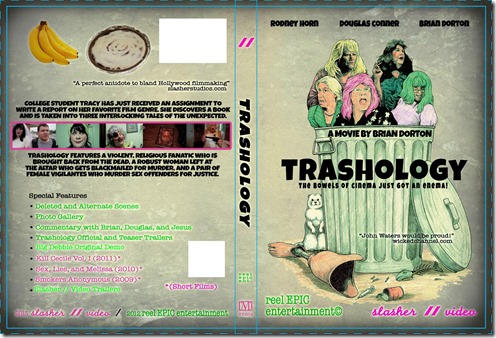