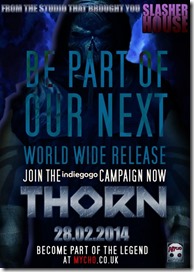 Thorn is one of the oldest stories from Mycho Entertainment and the short film won at Scary Or Die Film Festival. Now the crowd funding has begun to see that the feature length adaptation brings the legend back to life. The film harks back to classic slasher movies like Halloween and Friday the 13th, but with the usual Mycho twist. It is written and directed by MJ Dixon.

4 years ago on February 29th… Jessica Harper and her friends lived a nightmare that has left her pursued from that moment by the unstoppable Killer known as Thorn… Four years on, Jessica and a band of survivors from that night make an attempt to stop him once and for all… but how can you stop what can’t be stopped?
Posted by A Southern Horror Fan