Prepare To Battle Mold This Summer 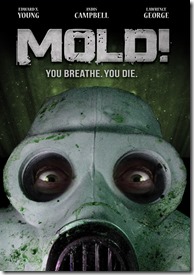 The Indie sci-fi B movie “Mold” is finally getting it’s DVD release. The film directed by Neil Meschino which is considered as a total 80’s throwback flick will hit fans shelves May 21st thanks to Wild Eye Releasing. Check out the DVD trailer below.

It’s 1984, and the war on drugs just got weird. A classified government project is underway to create a new weapon to combat the drug cartels. That weapon is a fast-growing, genetically engineered strain of mold designed to wipe out coca fields – the only problem is, this MOLD also feeds on human flesh! And when the murderous mildew is mysteriously released in a secret lab, it wages its own war on a group of unsuspecting scientists and military officials, who are forced to fight their way to safety while trying to contain the MOLD before it is unleashed on the world.