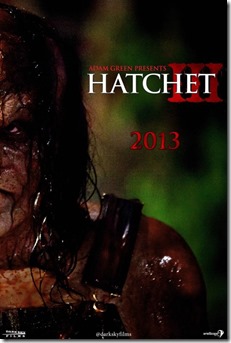 The much touted third installment in the slasher franchise Hatchet has finally been given it’s official release date. Hatchet III will be released on June 14th and is the directorial debut of BJ McDonnell. Along with the release date Dark Sky Films released a teaser trailer. In the series the bayou is plagued by the infamous supernatural killer of legend-Victor Crowley. The film stars Danielle Harris, Kane Hodder, Zach Galligan, Derek Mears, Sean Whalen and Caroline Williams.

Hatchet III continues the tale of the now-iconic villain Victor Crowley. As a search and recovery team heads into the haunted swamp to pick up the pieces and carnage left behind from the first two films, Marybeth hunts down the true secret to ending the voodoo curse that has left the ghost of Victor Crowley haunting and terrorizing Honey Island Swamp for decades. Check out the teaser below.