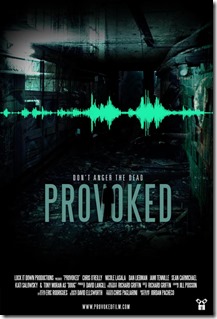 Check out the trailer for the horror flick Provoked. The film follows a group of amateur investigators who, despite investigating for months, have never found any proof of the paranormal. During the group's most recent investigation, like many times before, they come up empty. At this point, team member Matt losing faith in the existence of the paranormal performs risky attempts to provoke the spirits. At first, Matt's taunts appear to go unanswered but while on his way home the investigating equipment starts to register at it's highest level. The spirit answered Matt's taunts and followed him home. Terror quickly escalates for Matt, and his girlfriend, who attempts to defend his house from the ghostly intruder.