My Review Of The Trouble With Barry 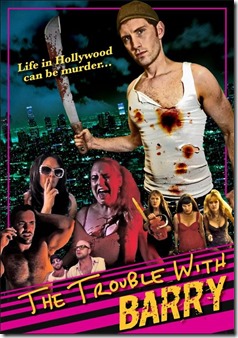 The Trouble With Barry is an Indie low budget film from writer/director Mike Justice and co director Stephen Kitaen, starring Peter Stickles, Lynn Lowry, Rena Riffel, Brinke Stevens, Michelle Bauer, Linnea Quigley, Matthew Stephen Herrick, Shannon Amabile, Juliette Danielle, Brian Nolan, Bruce L. Hart, Kelly Keaton, Chris Pudlo, Craig Taggart. It is a dark comedy that warps genres into a wild surreal melodrama of political incorrectness and fast past wicked hilarity. The story follows a disaffected narcissistic Hollywood actor well into his downward spiral of a decaying career. Barry Montenegro is a crude, offensive thespian who once had a shining career but fucked that up with his own sociopathic tendencies and is now relegated to the ranks of “web series” obscurity. An unfortunate career turn that also finds him as prime suspect in a sudden case of homicide that begin to plague the show still in pre-production. He is not a character that one should like or every hope to run into in life or career and somehow he is so relatable that he is almost lovable  The movie is 100% unequivocal genre driven kitsch fist fucked camp theatre that brings so much more Trash cinema than even the Logo dependent politically correct LGB&T community could find acceptable and that is what makes The Trouble With Barry one of the best fucking Indie flicks that I had the distasteful pleasure in viewing. Yeah I know a lot of that sounds extremely negative and may read as if I didn't like this film but much like this movie I tend to relate the “bad” words as “good” words, I guess that is why  this movie was a big piece of fabulous for me. So let me explain.

I find this new world of political correctness and social equality tedious, emotionless and restrictive. People just need to get a sense of humor. Thankfully there are a few writers and directors willing to prove to me that somewhere in this mass produced over sanitized conformist reality humor is still out there. The Trouble With Barry manages to play up the satirical aspect of stereotypes and clichés in the most fun, smart and devious manner. The dialogue is fast and witty throwing out more pop culture deep digs to offend pretty much every one who is or once was anyone in Hollywood. I am willing to bet that the writer and both directors cut their contacts list in half within the first stages of production of this film, if not then by now they have because these characters are obviously from personal interactions within the industry. And if they are not then that is just an injustice within itself! This film will not be for everyone, it is filled with offensive, possibly racist commentary layered with scenes of exaggerated stereotypes of not only those personalities expressed within the film but pretty much anyone that watches the film as well. However it is all in fun, with even the people involved with the film excited to poke fun at themselves and our bizarre cultural bromides.

For me personally- The Trouble With Barry is a cult classic B-movie that plays up the campier side of dark satire in the gayest way, but that being said this movie is far from a “gay only” movie. The humor and melodrama is very relatable to Indie cult hetero community as well and if not then for gods sake get your self a gay friend or admit that you’re a racist (and/or) bigot. The fact that the top cult scream queens cameo the first sequence within this movie is reason enough for all genre fans to give the movie a once over. The reason to embrace it is that it manages to be an insanely funny, intelligent and over-the-top piece of Trash/Camp cinema that proves individual expression and humor is not dead yet. The story stays mostly light with most of the edginess relying on the fact that most of the material can be quite offensive to the sensitive viewer but at the end it takes a strange sobering dark turn that reminds you that Barry is a fucking sociopath born of a sociopath. This film somehow gets it right on all accounts with nods to every style of genre film making technique used in the past 30 years plus I think they may have given a total shout out to every musical score used from night time Trash TV to classic Hitchcock with the 80’s VHS era thrown in just in case. Usually that much styling is a hot mess but The Trouble With Barry keeps it copacetic.
Posted by A Southern Horror Fan