Trailer Released For The Colony 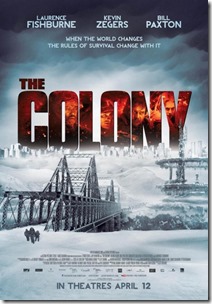 Check out the trailer for The Colony. The film is directed by Jeff Renfroe and stars Laurence Fishburne, Kevin Zegers, Bill Paxton. The film comes to theatres in April and tells of life after society’s inevitable collapse due to climate change but mostly due to an apocalypse of our own making. Based on the trailer the film looks tight, well produced and visually exciting. Plus the added element the gives a hint of H.G.’s twisted split in human evolution seen in The Time Machine that really brings the thrills.  The official date for the film’s release is April 12th.

Beneath the icy surface, survivors of Colony Seven struggle as food supplies dwindle and temperatures continue to drop. Plagued by illness and internal conflict, the colonists suspect the worst when they mysteriously lose contact with Colony Five – the only other known settlement. Sam, a strong-willed mechanic with a tragic past, joins a team headed up by Briggs on a dangerous expedition to find out what happened. After a hellish trek, they discover a threat much worse than imagined, and now Colony Seven must win a savage battle to preserve the last of humanity.