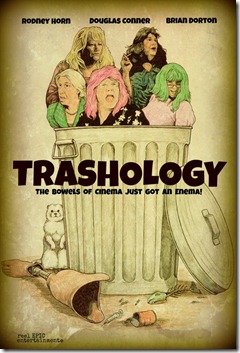 Brian Dorton’s “Trashology” is a love letter to John Waters and one hell-a fun movie! The film is comprised of three distinct stories of crazed madness and melodrama befitting a telenovela produced in Hell’s asylum. It has a wrap around story that works harder than an Asian on a stripper pole. Yes that hard and crudely. This ain’t no Lifetime movie bitches so if low brow humor at society and humanity’s expense offends you then fuck you. This movie is hilarious as hell and brilliantly sick with humor. From Ouija boards to bowel releases and beyond I don’t think there is anything left out of this wonderfully crafted train wreck of lives. The first story is entitled “The Vat” which features friendships only the Satan’s geriatric grandmother could relate to or anyone with a parent over the age of 50. The characters are over the top and draw from a creative point somewhere between Golden Girls on crack and Golden Girls on acid, I want to tune in next week to see what psychotic mayhem these woman get into next! Following the crazed social turrets outburst that is “The Vat” comes the twisted little tale called “Big Debbie” which features the one fetish that I just can’t wrap my little gay brain around known as ‘squashing’. As I have been told over and over, it is a thing! Yet that is just the start of this sick little puppy because poor Debbie goes through some shit and thankfully comes through only slightly more damaged-in this film that last statement should be followed by ‘if a person can be more damaged than this poor woman to begin with’. Don’t get me wrong everything in this segment is dark, funny, and one hell of a ride through Psychoville that I will take over and over again any day. Following “Big Debbie” is a tale that would make Mickey and Mallory shit their denim jeans called “Inglorious Bitches” about two friends who decide to take their love of killing people and turn it into cause for killing people by going after sex offenders. As if we all haven’t thought of taking a ball bat covered with spikes and ramming it up some sicko’s ass until he is D-E-D dead! Well anyway the characters in this segment are so twisted and wonderful. Actually there isn’t one badly written or poorly acted character in this little mental outburst of filthy thoughts and filthy jokes.

The story for “Trashology” is genuinely well written and fucking brilliantly executed which is more than the Texas Justice system can say. It is wicked sick how all the characters relate to each other in all three stories that show a true and honest passion for this genre from Brian Dorton that gives the film a slight seriousness which rocks because to make so many characters intertwine in a anthology either takes one hell of a vision or a true psychotic with some yarn and a white wall. (The walls are almost always white! well white-ish) Anyway “Trashology” is so much more than a love letter to John Waters it is hope – hope for a subgenre that almost never gets respect or appreciation yet makes some of the best written and most hilarious cult films evah! It is also a film that is epically brilliant and hilarious. I MEAN THIS FILM IS SICK! I think I will need an exorcism and enema just to get regular again. Okay I am lying! Those things are for funsies I was never regular to begin with and thank the gods of the shitty bowels of cinema neither is “Trashology”. Now I am off to Walmart to pick out each of these characters and isle stalk them for my never ending continuation of this twisted flick!
Posted by A Southern Horror Fan