I was lucky enough to be born in 1972 so I vividly remember growing up in the first 8 years of life glued to the small 13 inch screen in my room watching the black & white episodes of Alfred Hitchcock Presents hoping my mom didn’t catch me because this type of programming was a no-no, she said it gave me nightmares- as if that is a bad thing! Anyway I was hurt when they stopped airing the episodes and slowly began showing Kung Fu theatre type stuff. Nothing against Kung Fu but I really liked my eerie stories. So I am supper excited that they are finally doing a biopic of the legend. I can’t believe it has actually taken this long for some one to get serious about it though!? Especially since the era of TCM. I dedicate my time to the channel anytime they have a mini marathon featuring Hitchcock’s work.

Any way here is Sir Anthony Hopkins as the great Alfred Hitchcock from the upcoming film. 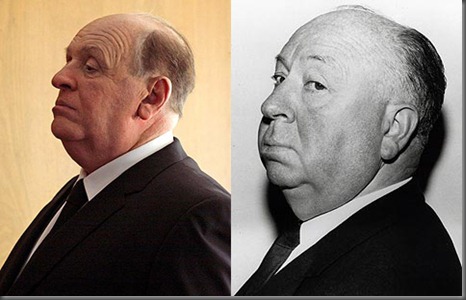 Form Aceshowbiz.com
In the true story drama, Hopkins is joined by Scarlett Johansson, James D'Arcy, Jessica Biel and Helen Mirren. The movie itself tells the untold story of Hitchcock's struggles during the making of the 1960 film "Physco". It also follows the late director's relationship with his wife Alma, who is his sounding board and constant collaborator for the fifty-four years of their marriage.
Johansson, who will star as legendary actress Janet Leigh in the film, recently told Access Hollywood that she was very impressed with Hopkins' portrayal of Hitchcock. "I've seen some makeup tests recently, and just watching [Hopkins] play Hitchcock is pretty memorable in itself," she said. "He's gonna be bananas! I can't wait for that - I'm very excited."
Previously known as "Alfred Hitchcock and the Making of Psycho", "Hitchcock" is directed by Sacha Gervasi with John J. McLaughlin penning the script based on a book by Stephen Rebello. Fox Searchlight Pictures still hasn't set a U.S. release date for the high-end biography drama.
Posted by A Southern Horror Fan