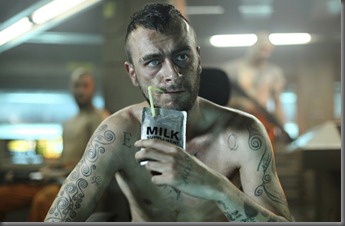 Based on the previous material I have seen on “Lockout” I wasn’t quite sold on the film. I like Guy Pearce and all but just wasn’t sure about this story. Well that has changed thanks to the latest trailer for this futuristic prison riot flick where the presidents daughter is trapped in a maximum security facility. This facility is hovering above the planet and Guy has to go get the daughter and return her home. Only problem is, all the inmates are running wild in the place.

“Lockout” is officially scheduled to be released on April 13, 2012


Official synopsis: Guy Pearce is Snow, a loose-cannon government agent convicted of a crime he did not commit. He is offered his freedom if he can rescue the president’s daughter from a prison in space that has been overtaken by its prisoners.