My Review Of "Alien From Area 51" Documentary 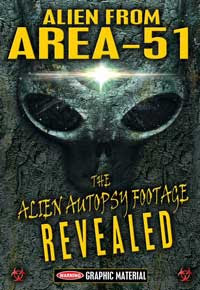 "Alien From Area 51" is a documentary from Reality Entertainment that sets out to explore the UFO phenomenon. It focuses on the Roswell crash of 1947 and discusses the cover up compared to actual testimony from key eye witnesses. This documentary shows the evidence already familiar in the Roswell incident as well as the controversial alien autopsy footage. Blending crash evidence photographs with cool graphic illustration to attempt to give a definitive analysis of the Roswell UFO cover-up.
The story is told in a chronological order from the moments of the crash right up until the release of the autopsy video. The central focus of this 71 minute documentary being the story surrounding the discovery and controversial restoration of the autopsy film footage as told by Ray Santilli and Gary Shoefield, the two men who claimed to have found the footage while searching for undiscovered Elvis video.  This documentary does a very convincing job of "dotting the I's" and "crossing the T's" in the Roswell crash cover-up. The interview segment solidifies a sense of truth to the story. Both men come off as very believable. In the interview they explain the damage to the film and how they set out to restore the images as well as admitting the parts recreated. With complete honesty they go into detail of their personal agendas and subsequent fall out they came from around the world over this footage which I found to be a genuine attempt to seem forth right. The whole interview comes across as unbiased and complete in both defending the two guy's story, plus the validity of the alien autopsy footage.
I have to admit that personally I have always believed in aliens and UFO interaction with earth. I believe they are the origin of our mythologies and resulting religions. This documentary was an insightful and entertaining film. The information and images were well produced and edited in a way that allowed the film to continuously flow without becoming mundane. It kept my attention through the whole documentary with well placed graphic breaks against actual footage. The interview is extensive and informative. You learn who these men are and get a sense of their beliefs in the ufology culture. The anticipating build up to the final segment is an added treat. The Alien Autopsy Footage. The complete and uncensored footage of the autopsy is a nice piece for any UFO buff's collection. Before watching this and hearing from the two men who discovered the footage I like most of the world believed it all to be a hoax. Now after seeing the footage in context of this documentary I can honestly say that I believe the UFO crash at Roswell and subsequent autopsy of actual crash victims transpired.

You can check out this documentary at RealityEntertainment.
Posted by A Southern Horror Fan