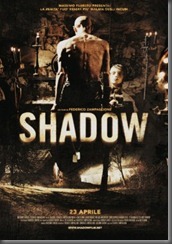 “Shadow” is a mind-bending venture into the psyche of death, regret and guilt. Written by Frederico Zampaglione, Domenico Zampaglione and Giacomo Gensini, directed by Frederico Zampaglione the film tells the story of a war vet enjoying a getaway in the European mountains wehre he meets a beautiful woman. Plus he as well as his new companion run into some very aggressive locals. The film stars Jake Muxworthy and Karina Testa as the protagonists who run into horrors far worse than some psychotic rednecks. At least that is what your thinking the case is as you watch. 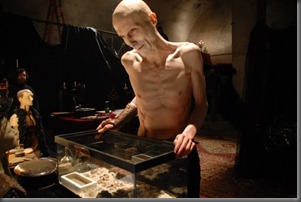 The story is multi-dimensional with elements of romanticism, all be it brief, cut short only by the shear brutality of the action, with an almost grindcore feel. “Shadow” gets your adrenaline and nerves going as the menagerie rush through the forest only to discover another more sinister figure in the woods. That is when the true nightmare kicks in. Now even though this film pulls the wool over your eyes in the last ten minutes, the movie has some killer things going on. It is gritty, almost grindhouse and exploitation saturated as a truly evil antagonist captures his victims. A gauntly, sadistic creature as haunting and mesmerizing as he is grotesque and mindless. A true psychotic master fuck with an almost demonic presence. 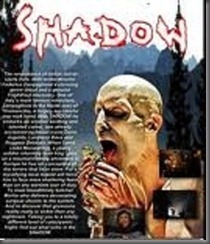 The gore is cringing to say the least. The effects are great. The soundtrack is hypnotic to the point of driving up your anxiety as you watch the scenes of gruesome action unfold. The film keeps you on an intense ride. The downside is the ending. A controversial approach to finality. It leaves you feeling like you have been robbed. It was intended as a mind blowing plot twist to make you think, except it comes off more like a “fuck you movie-goer”! Still I can’t say that this film is crap or that it tricked me out of my “torture-porn pleasure” because “Shadow” is actually an entertaining and intense movie experience. A pretty good film even with the questionable ending.