MJ Dixon Is Answering Your Questions On TUMBLR 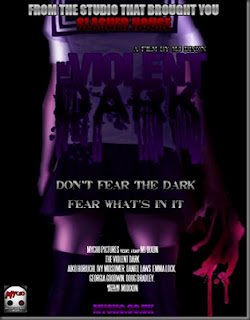 MJ Dixon has recently announced his newest project "The Violent Dark" and started a production blog to let us all stay up to date with the production process. Recently he opened up his TUMBLR blog to fans questions. I asked him these 3 and he answered with awesome responses...


Here where my questions along with his response:

1. Will "The Violent Dark" be closer to a "Chainsaw Lollipop" type scenario or will it stay more routed in the classic "Demons" style of story telling?
2. Have you caught any backlash for your recent views toward the zombie craze sweeping the globe?, some fans or beyond fanatical.
3. Could the original concept for "Demon Academy" see the light again after "The Violent Dark" or is that original story shelved completely in order to tell the story of Violet Dawson?


1. Violent Dark is much closer to ‘Demons’ in almost everyway… I always really liked siege movies of all kinds, but it was something that I am really looking to emulate as a feel for the movie. There will be humour, but it will be a far cry away from Chainsaw Lollipop (Although I’m totally Psyched for the game).
2. I guess everyone has their own opinion about horror movies, One thing I’ve always found is that Horror fans as a community never really take it too far, I’m always arguing with someone about my preference to Myers over Voorhees, but it never goes too far, I think Horror fans are some of the most respectful fans in the world. So they are quite accommodating to opinions that differ to their own.
3. The original Story for ‘Demon Academy’ will most likely continue in some form, some elements ended up in Slasher House and even Creepsville. So its something I’ll draw from, But it does have a much bigger core concept that could be Developed into something bigger I think. ‘Demon Academy’ was always such a small part of a larger machine, so it would be interesting to see if the larger concept would still work with the elements removed for use elsewhere. But the story was always that of Violet Dawson’s from the get go.

I suggest you go on over to the link below and ask some of your own questions.  http://t.co/IUeSv8Wc Any filmmaking question... feel free to ask :)