My Review Of “An Unholy Exorcism”

“An Unholy Exorcism: The Devil Inside” is a raw footage shot film based on true events. It is the story two priests who are summoned by the church to exorcise a young girl. Two filmmakers accompany the priests to document the events and they soon set out on a quest to save the possessed girl. The story is told in a raw documentary style that has become popular in paranormal movies lately. There is an organic feel to the movie as it follows the two priests on their journey into hell to record the demonic events as they unfold. 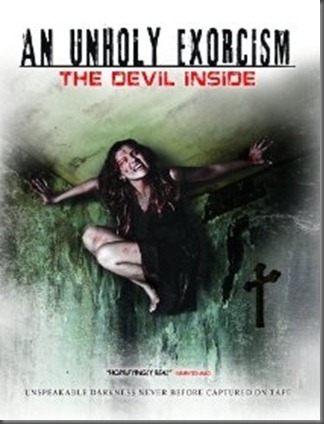 Right from the beginning “An Unholy Exorcism” feels like an unedited documentary, the cast sound convincing in their character portrayals. Tina is more convincing than some of the possessed that I have seen on paranormal television programs and the priests seem like actual men of  the cloth. I enjoyed the conflict between the pastor and the two priests giving the film a gritty element between two very different sets of Christianity. The special effects were shot cleverly so that they maintained credibility. Tina is believable as a troubled soul which is not an easy skill for an actor to pull off but she is convincing as a possessed person.
The scenes where the demon leads them into the cornfields were eerie as hell yet it could have been so much better with a creepy soundtrack to help build the atmosphere. I don’t believe it would have taken from the raw documentary approach of the movie. The truly saving grace of “An Unholy Exorcism” is the blasphemous dialogue of the Tina character when the demon speaks through her. It is actually the most entertaining part of any exorcism film for me. The second principle of exorcism movies that this picture grasps to holding the story together is the discovery of the demons names. You have to know their names before you can expel them from the world. “An Unholy Exorcism” holds that rule firmly in the story.
“An Unholy Exorcism” does have a cool back story that flows through the film. The understanding that all demon possessions are connected spiritually and only partial truths are exposed that tell the over all plan of evil. Only when a priest has exposed the complete cycle of demonic possessions can that true nature be revealed. Sounds confusing. Here is my theory. Each priest has an eternal connection with light and dark as does every soul on earth. Demon is Legion and the battle rages in micro-episodic moments of time. It may take a lifetime for a priest to perform exorcisms before each of the smaller entities of Legion finally reveal the true ruling demonic presence. Only then can the demonic be completely exorcised from the world. That is my theory.
“An Unholy Exorcism: The Devil Inside” comes from World Wide Multi Media. The film stars Matthew Ashford (Days Of Our Lives), Nick G. Miller, Ray W. Keziah, Rob Kahn, Dara Wedel, David Michael Ross, and Heather Harvey. The film is written and directed by Nick G. Miller. The story is detailed and the actors are convincing. My only complaint is the one of lack of soundtrack in background. The raw documentary feel is believable and there is a twist at the end of the film which is pretty cool.
Chemical Burn Entertainment and Nick G Miller and World Wide Multi Media
Posted by A Southern Horror Fan