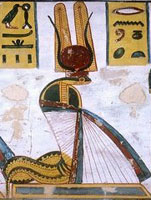 Cult center: Faiyum, Dja, Thebes
Renenutet was a protective snake-goddess whose role evolved in unexpected ways over time. Originally, she guarded the king and later the farmers' harvests. She was depicted as a raised cobra with the sun disk and horns on her head, or two tall feathers and the solar disk. Alternately, Renenutet was shown as a woman with a snake's head, sometimes nursing her son Nepri.
A festival to Renenutet were celebrated during the last month of the winter/spring season (Peret) when crops were planted. Another celebration was held in her honor in the first month of the spring/summer season (Shemu) when the plants began to ripen.
Due to her importance to the common people in protecting their livelihoods, Renenutet evolved once again into a household deity who protected children. She was a provider and nourisher of infants, including giving newborns their name, determining their destiny and how long they would live.