My Review Of "Do It Yourself" 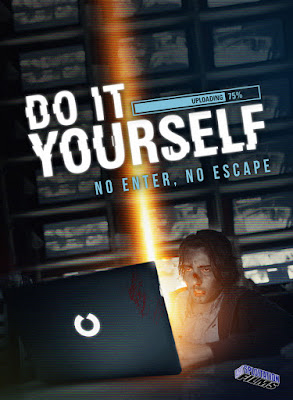 "Do It Yourself" is a Greek crime-thriller from writer / director Dimitris Tsilifonis and stars Konstadinos Aspiotis, Christos Loulis, Themis Panou, Mirto Alikaki, and Makis Papadimitriou. "Think of countries where guns-blazing, action-packed genre films are made and Greece probably is not on the top of the list." That is how this film was introduced to me in press, and yeah I don't think of Greece when it comes to action film- so it instantly had me intrigued.

Tsilifonis manipulates various cinema tropes cleverly by both embracing timeless action elements and technology. And yet at the same time he creates an air of "risk it all" frantic storytelling,  as if to force the viewer to both tell the story and go along for the ride. It is brave, boisterous and entertaining - and I imagine - a totally Greek thing to do! The story may not be completely original, there is an obvious influence that shows some Hollywood worship. However, "Do It Yourself" is unique, and slightly more original by giving the audience an almost 1st person "gamer"/"tech thriller" point of view.

The acting and action moves smoothly for the most part, there are moments when transition scenes, and expositional moments drag a bit, and feel clunky. That being said, Tsilifonis regains control quickly and maintains it on a level that makes you almost forgetall that. He keeps a very entertaining movie moving forward, almost to the point of making the clunkiness seem intentional. After all the film title is "Do It Yourself".

The action and "horror" aspects come from the crime thriller nature of the story. There is a good measure of suspense, there is murder, and there is a level of anxiety in the characters, and the way that the story is told. I would have preferred a more grindhouse / giallo flare in the murder, but overall the movie is entertaining. "Do It Yourself" is right there, set perfectly in classic Hollywood crime thriller fare. It never reaches the heights of A level cinema but it gets close enough to a real good movie worth watching. (3.5/5)