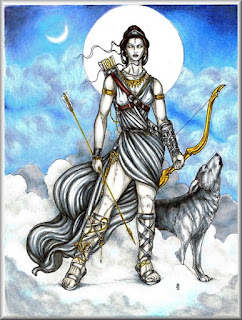 Artemis was one of the most widely venerated of the gods and one of the oldest (Burkert 1985, 149). Her later association with the moon is a popular idea which may come from her association to Diana during the Roman period. She is also identified with Selene a Titaness who was a Greek moon goddess, and she was sometimes depicted with a crescent moon above her head, also the Etruscan goddess Artume.

Artemis is said to be the daughter of Zeus and Leto, twin sister to Apollo, God of Enlightemenment. However, Artemis and Apollo were both firmly established deities in the area long before the arrival of Zeus. Artemis was born on the sixth day of the month and immediately assisted her mother in bearing her brother Apollo, who was born a day later. The worship of Apollo and Artemis is believed to have come from the Hyperboreans.

Artemis, the goddess of forests and hills, was worshiped throughout ancient Greece. Her best known cults were on the island of Delos (her birthplace); in Attica at Brauron and Mounikhia (near Piraeus); in Sparta. She was often depicted in paintings and statues in a forest setting, carrying a bow and arrows, and accompanied by a deer. Artemis represents the unpredictable nature of, well, Nature, and the wilderness. Those who embark upon a hunting trip are at Her mercy.  for She is the embodiment of all that is Wild. Artemis is also the Goddess of the nymphs, all the delicate spirits of Nature.