My Review Of "The Laplace's Demon" 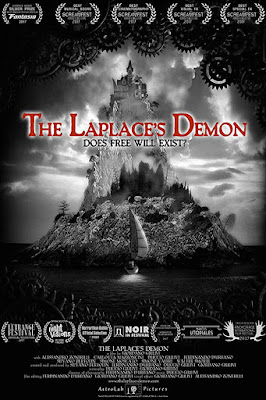 "The Laplace's  Demon" is directed by  Giordano Giulivi and stars Alessandro Zonfrilli, Carlotta Mazzoncini, Duccio Giulivi, Ferdinando D’Urbano, Silvano Bertolin, Simone Moscato, Simone Valeri, and Walter Smorti. The film is described as part Hitchcock, part Serling and part Giallo. The black and white suspense thriller does harken back to those classically told horror stories, that built the genre, with style and intelligence.


“A team of fringe scientists researching a way to predict the future are trapped by a malevolent professor in a deadly test of their own experiment.” It is inspired by the theory of the same name, which concludes that the universe is a huge clock where humans are nothing but its cogs: predictable and incapable of free will.

The story is a smart, steady paced suspense mystery told with claustrophobic,  well thought out shots that frame the contrast between light and shadow beautifully. The characters, though not completely actualized, are both intriguing and familiar characters. They are the ideal fashion of indulgent self worth and intellect one expects to find gathered at such an outlandish, and Gothic deathtrap on an island in the middle of the sea.

The writing and dialog is clever, concise banter, super smart theoretical explanatory summary, that makes the film elevated concepts approachable and comfortable for the "everyman", and is entertaining. The scenes are stunning and the special effects are so cleverly done. Not to mention that "The Laplace's Demon" utilizes, so creatively, one of the best props to create such effective moments of suspense- a dollhouse. Overall this is a great, modern day revival of classic horror. (4.5/5)
Posted by A Southern Horror Fan