Poster And Trailer Released For "Queen Of Snakes" 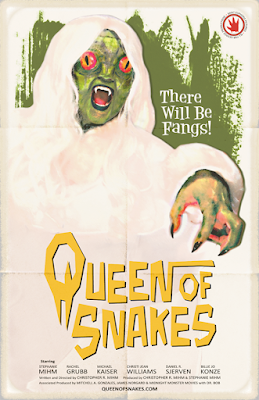 Check out the poster and trailer for b movie horror "Queen Of Snakes". The film is written and directed by Christopher R. Mihm, produced by  Mihm, Stephanie Mihm and Julie Ann Mihm. It stars Stephanie Mihm as Mrs. Crawford, Rachel Grubb as Betty, Michael Kaiser as Deputy Hayes, Christi Jean Williams as Mrs. Davis, Daniel R. Sjerven as Henry and Billie Jo Konze as Ethyl.

Angry at her daughter/caretaker for being directly responsible for her paraplegia, the reclusive Mrs. Crawford accidentally receives a package containing a mysterious amulet. The ancient treasure grants her the horrific powers of a lesser Norse goddess known as the Queen of Snakes and, in a quest to control them, becomes a danger to herself...and potentially the ENTIRE WORLD!