My Tribute: Dee Wallace Is A True Queen Of Horror

Dee Wallace has truly molded and shaped the female character within the horror movie genre. Her first job in the field of nightmare story telling came in 1977 when she played Lynn Wood in Wes Craven’s “The Hills Have Eyes”. One of the most disturbing gore pictures of the 70’s. Here character in the film that finds a family on vacation stranded in the desert 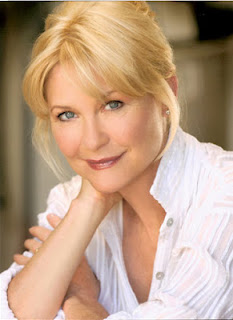 and ruthlessly attacked by mutant cannibals gave us a truly horrifying glimpse into a young mother’s worst fears. The screams that came from Dee Wallace coupled with the shear terror in her eyes set the tone for horror movies to come.
After that film Dee Wallace moved to television but not from mine nor any other horror fans heart. Then finally after the four year hiatus the original queen of scream returned to the horror scene in the 1981 movie “The Howling”. A film that is always on my top movie list and never far from the forefront of my thoughts.
Right from the beginning her character in this werewolf film gets put to the test of her nerve and sanity. She plays Karen White, a television anchor who does investigative work. We watch her go into the seedy underworld of sex-n-murder as she makes contact with a purported serial killer. Then to get away she lands right into the cradle of horror by temporarily vacationing in a denizen of lycanthropes. Dee Wallace gives us great desperation, fear, and later strength in her numerous scenes where she deals with infidelity, werewolves and the return of the serial killer that started her stress in the first place. A great horror classic and a true horror diva that has always remained in my mental repertoire through the years. 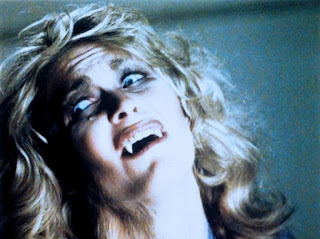 Then after “The Howling” Dee Wallace done the sci-fi flick we all know so well “E.T.” and a television movie about an American cult. Until once more she found herself planted firmly in the minds of horror fans yet again when she tackles the role of Donna Trenton in Stephen King’s 1983 film adaptation of “Cujo”. Truly one of the best films of all time. Despite the obvious exclusion of the true depth of terror that Stephen King manages to portray in his writing but somehow never lends itself to the movie versions. A point that fades when talking about “Cujo” mostly because of Dee’s ability to portray such panic and desperation while trapped in a compact car in the heat with almost no food and water while a rabid dog tries to tear them apart.

In 1985 Dee Wallace was most scene in television where she found her self in the genre again in the Twilight Zone reboot series before going further into the paranormal in the 1986 movie “Shadow Play”, a film about a playwright haunted by the image of his dead fiancé who committed suicide.  Not long after that she played Helen Brown in one of the best sci-fi/horror blends of all time, the original “Critters”. I love this film. Yet again Dee is a distressed mother fighting and fearing over the welfare of her family only this time the beast is truly alien and yet still bent on tearing her apart. 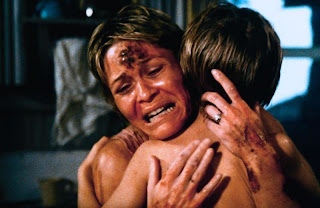 She went back to television again for five more years before finding her pathway again by razer sharp jaws in the 1991 sequel “Alligator II: The Mutation”. She played Chritine Hodges. Not quite what we call horror per se but creature features offer gore and fear just the same. I love them as much as any of the horror subgenre’s but that isn’t saying much because I love all of the horror genres equally. Yet that same year she graced us with another horror cult classic “Popcorn” where she Suzanne. This true horror flick was kind of a Leatherface styled slasher flick that gets very little love at least not like say Friday or Chainsaw. It was an average slasher film. Dee Wallace with the brunette do is actually iconic in the movie.

She went on to be in the 1993 short “Alone In The Dark” and another cultish movie “Prophet Of Evil” which was made for television which was followed by a ton of more TV series and TV movies before once more showing her skills in the horror genre when she played Patricia Ann Bradley in “The Frighteners”. A cool blend of horror/comedy which did not go over back in the day like it has now. 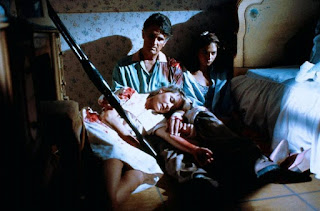 In 1999 Dee Wallace held a small role in “Deadly Delusions” a film about a series of brutal murders that take place in a town only discovered when it is cut off by an earthquake. She really gripped the horror world in 2005 by completely showing her comfortable ease of playing in scary movies by showing up in “Boo”, “Scar” and “Headspace”. Solidifying her dominance in the horror movie realm permanently. She has practically been a constant in the movies of nightmares through the 21st century reintroducing herself to her scores of fans and showing some of the new crop of fans what it really is to be a queen of horror. Between 2007 and 2011 Dee Wallace has gone on to do films like “Halloween”, “Little Red Devil”, “The Stalker Within”, “House Of The Devil”, “Stem Cell”, “Raven”, “Pound Of Flesh” and “Exit Humanity” not to mention the strange horror film Doug Schulz “The Dark Fields”. Right now she is slated for the upcoming films “Lords Of Salem”, “Beyond”, “Unhallowed”, and “Nightmare On Elm St. 2” showing that she has no desire to slow down. Also next to Betty White, Dee Wallace may be the hardest working woman in show business. I know she is my one true original Queen of Horror!
Posted by A Southern Horror Fan